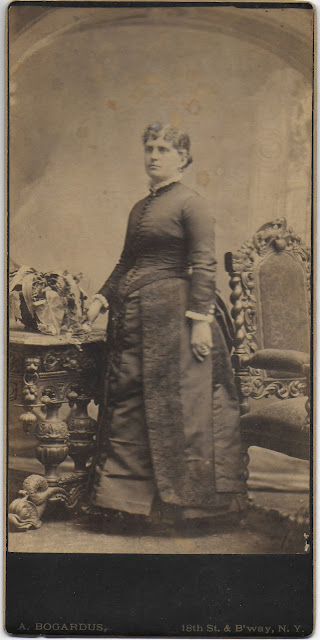 Photograph of Mary Munsell; taken at the Bogardus studio at 872 Broadway in New York, New York.

Mary may have been Mary C. (Merrill) Munsell (1849-1890), a Boston, Massachusetts, native and wife of Harvey May Munsell, who received the Medal of Honor for his actions in the Battle of Gettysburg in the Civil War.

There were other women named Mary Munsell in New York and Connecticut, including Mary C. Merrill's daughter Mary Isabel Merrill, "Belle", who was born about 1871.

According  to a mention on page 634 in A Merrill Memorial: An Account of the Descendants of Nathaniel Merrill, An Early Settler of Newbury, by Samuel Merrill (1855-1932), Mary C. Merrill was born 20 December 1849, the daughter of Silas Whiton Merrill and Eliza Belcher (Crabtree) Merrill of Boston, Massachusetts.

On 19 May 1869 in Boston, Mary married insurance agent Harvey May Munsell, son of James and Mary Munsell.  Harvey, born in Painted Post, New York, received the Medal of Honor for his actions as a color bearer during the Battle of Gettysburg.

Mary and Harvey had one child, I believe, daughter Mary Isabel Munsell, "Belle", born about 1871.

Mary C. (Merrill) Munsell died 13 November 1890 and was buried in Boston, according to her death record. She is presumably the Mary Munsell buried in Mount Auburn Cemetery in nearby Cambridge, Massachusetts. That Mary's death date is shown as 26 November 1890, though there's no photograph to verify, and that was likely the date of her burial, not her death.  Harvey, who remarried, died in 1931 and is also buried in the Mount Auburn Cemetery in Cambridge, in the same plot.

Also in that plot is another Mary Munsell who died in 1931, presumably daughter Mary Isabel Munsell.

Posted by Pam Beveridge at 5:33 AM