Cabinet Photograph of Alden B. Morse, Class of 1897 at Merrimac Normal School; by the Oak studio; Merrimac, Massachusetts 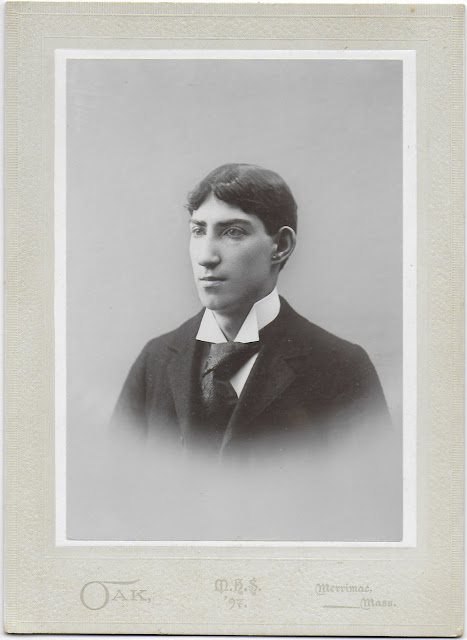 Cabinet photograph of Alden B. Morse, Class of 1897; photo by the Oak Studio of Merrimac, Massachusetts.

Notice the abbreviation/date in the studio imprint - it appears to be M.N.S. '97, and, if so, was presumably Merrimac Normal School at Merrimac, Massachusetts.  The abbreviation could also be M.H.S., for Merrimac High School, but Alden was born in 1876, so graduating from high school in 1897 doesn't seem as likely. 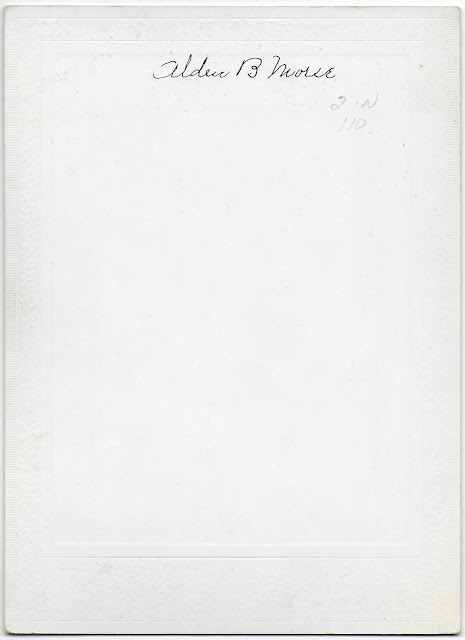 According to his World War I Draft Registration Card, Alden Bradford Morse was born 8 November 1976, presumably in Merrimac, Massachusetts, and working as a shoemaker when he completed the form.

At the time his birth was recorded, it appears his parents hadn't picked out his name, as I found a birth record for a Morse born on 8 November 1876 at Merrimac, Massachusetts. The parents on this record were shown as Walter H. Morse and Mary A. (Sanborn) Morse.

I didn't find a marriage record for Alden. He lived with his parents and siblings in Merrimac, Massachusetts, and continued living with younger siblings, Rena Fields Morse and Forrest Adams Morse, after their parents passed away, Walter in 1922 and Mary in 1933.

Alden, Rena and Forrest were still in the same household at the time of enumeration of the 1940 Census.  Alden made his Social Security claim in 1946 and died in 1954 at Haverhill, Massachusetts.

Deaths cited appear in the Massachusetts, Death Index 1901-1980 - the year only - available to peruse on Ancestry.com or at a Family History Center.

Posted by Pam Beveridge at 3:58 AM