Newspaper Clipping about Theodore Lincoln of Dennysville, Maine, & the 6th Maine in the Civil War 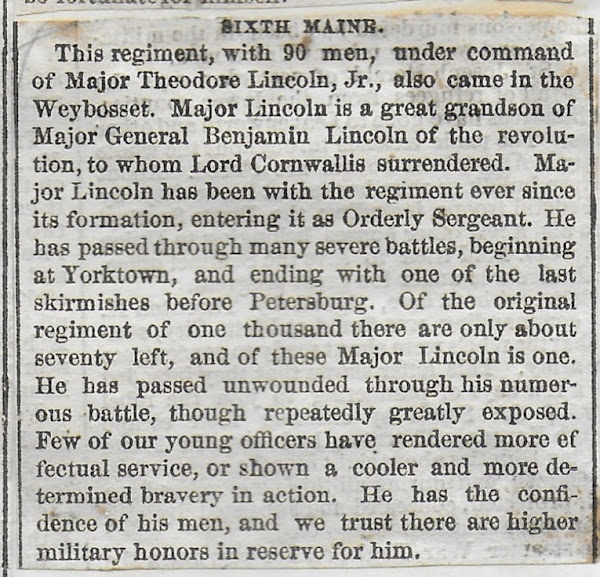 Newspaper clipping about Major Theodore Lincoln, Jr., a Dennysville, Maine, native, and officer in the Sixth Maine.
Note: Rather than Theodore Lincoln, Jr., I believe he was that man's son Theodore Lincoln III (1830-1865) as this Maine veterans cemetery record indicates. Many military records refer to him as a Jr.
Found in a journal of underlying handwriting pasted over with many clippings, presumably by someone sympathetic to the Union and with abolitionist leanings.
A transcription appears at the end of this post.
Theodore Lincoln III (1830-1865) was the son of Theodore Lincoln, Jr., (1800-1867) and Elizabeth Cushing Lincoln (1800-1877). Theodore III was the great grandson, as the article notes, of Benjamin Lincoln (1733-1810) was the celebrated Revolutionary War General to whom Cornwallis' second offered his surrender at Yorktown.
If you have information to share on any of the people mentioned above, please leave a comment for the benefit of other researchers.
Perhaps a reader will know if Theodore Lincoln III came home from the War in 1864 with lingering illness or injury, which contributed to his death in 1865.
Transcription:
SIXTH MAINE
This regiment, with 90 men, under command of Major Theodore Lincoln, Jr., also came in the Weybosset [a steam ship]. Major Lincoln is a great grandson of Major General Benjamin Lincoln of the revolution, to whom Lord Cornwallis surrendered. Major Lincoln has been with the regiment ever since its formation, entering it as Orderly Sergeant. He has passed through many severe battles, beginning at Yorktown, and ending with one of the last skirmishes before Petersburg. Of the original regiment of one thousand there are only about seventy left, and of these Major Lincoln is one. He has passed unwounded through his numerous battle, though repeatedly greatly exposed. Few of our young officers have rendered more effectual service, or shown a cooler and more determined bravery in action. He has the confidence of his men, and we trust there are higher military honors in reserve for him.
Posted by Pam Beveridge at 6:36 AM 1 comment: 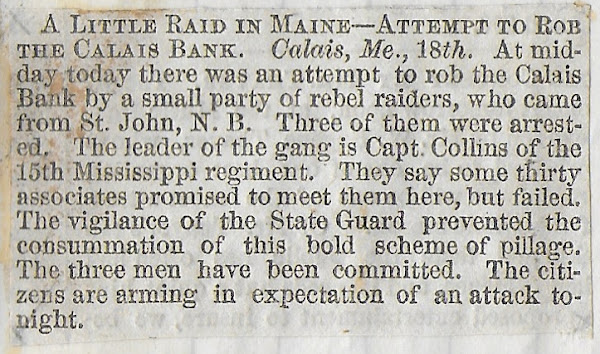 Two period newspaper clippings about the raids in Eastern Maine, carried out or proposed, by Confederates massing in Saint John, New Brunswick, during the Civil War.
The clippings mention
The clippings are contained in a notebook, the original handwriting in which is covered over by many newspaper clippings that appear to have been pasted there by someone with Union and abolitionist sentiments.
Transcription of the clipping at top:
A LITTLE RAID IN MAINE - ATTEMPT TO ROB THE CALAIS BANK. Calais, Me., 18th
At midday today there was an attempt to rob the Calais Bank by a small party of rebel raiders, who came from St. John, N.B. Three of them were arrested. The leader of the gang is Capt. Collins of the 15th Mississippi regiment. They say some thirty associates promised to meet them here, but failed. The vigilance of the State Guard prevented the consummation of this bold scheme of pillage. The three men have been committed. The citizens are arming in expectation of an attack tonight.
The second clipping:

Transcription:
EXCITEMENT ON THE BORDER OF EASTERN MAINE
Rebel Raid Apprehended
The St. Croix Herald, published at Calais, Me., represents that a general excitement pervades the towns on the eastern boundary of Maine, growing out of an apprehended foray by rebel refugees in the British Provinces. The Herald of 23d says:
"The towns on this border have been alive with excitement during the past few days and nights owing to well authenticated reports that a raid was in contemplation by rebel agents and "roughs" who had their headquarters at St. John. We were reliably informed when in St. John a few days ago that the programme of rebel operations consisted not only in the taking of the Chesapeake but also the steamer New England, and then making a raid upon the towns on the border, robbing the banks and committing general destruction by fire, robbery, etc. The failure to take the New England rather strengthened the impression that the raid on the borders would be attempted, and accordingly on Thursday night the people here and at Eastport organized for home defense.
There was any number of citizens ready to volunteer, and the every effort was made to give the invaders a warm reception. A company of about seventy men was raised for the emergency, consisting of nine months' men and State Guards, under the command of Capt. Flint. Their rendezvous was at the Armory. Squads of the men were detailed for picket duty at the several bridges and other exposed stations leading from New Brunswick, through which channel the rebs intended to find their way into our city. At intervals during the night of Thursday, as reports came in to the headquarters from the various outposts, intense excitement was manifested, and strong hopes were entertained that is the invaders were really coming they would come then and there.
The night was stormy and the guards, notwithstanding they were unaccustomed to the service, entered into the work with much zeal and enthusiasm. Between three and four in the morning a fire broke out and destroyed an old building somewhere in the rear of the town of St. Stephen. It was thought by some that it was intended as a decoy, but it didn't take as the guards had orders not to leave the city. It was supposed that some suspicious persons, the advanced guard of the enemy's forces, were prowling about the city, and the Provost Marshal was directed to make a search at the Exchange where the suspected men were stopping, but there was nothing discovered that would implicate the parties. Toward morning the guards descried some men lurking about the post office, but no arrests were made.
Thus ended the first night of the watch for the invaders. Their non-appearance was regretted, as many of our boys were 'splilin' [presumably 'spoilin'] for a right, and unless the raiders had come in overpowering numbers, but few of them would have lived to tall the tale of the adventure. Men have since been detailed nightly for the service, and the tread of armed men through our streets at the midnight hour has recently become one of the features of life on the border. At Eastport, the citizens are also wide awake, and a large force patrol the streets and guard the town nightly. There can be no doubt, from information received on the subject from various sources, that such a rain as we have been preparing for has been and is in actual contemplation. It will not do to slumber as we are yet by no means secure from danger."
The Provost Marshal of Belfast has received a letter from Eastport, which says:
"Last night almost every man and boy in Eastport went armed, and a guard of sixty men was kept in Frontier Bank all night. It seems a large party of roughs left St. John for some place, and a remark made by them was overheard before they left, that they were going to rob a bank in the United States, within sixty miles of St. John."
The citizens of Eastport telegraphed to Augusta for seventy-five rifles or muskets."
At this time, the Army still maintained Fort Sullivan in Eastport on Moose Island, although it was much reduced in readiness.
If you have information to share, please leave a comment.
Posted by Pam Beveridge at 10:29 AM No comments: