CDV of a Man IDed as C. A. Chadwell; by the Phillips Studio of Lynn, Massachusetts 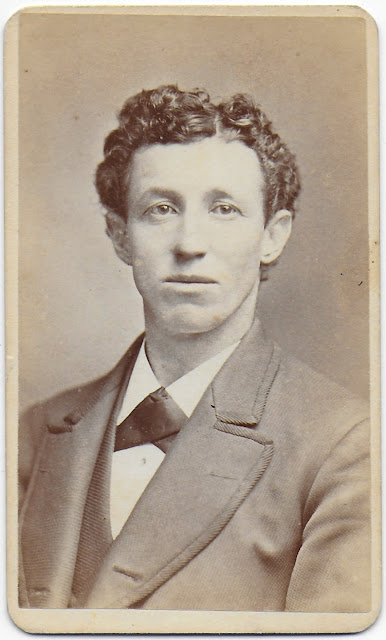 CDV of a man identified in his own handwriting as C. A. Chadwell. The photograph was taken at the Phillips studio of 27-1/2 Market Street, Lynn, Massachusetts. 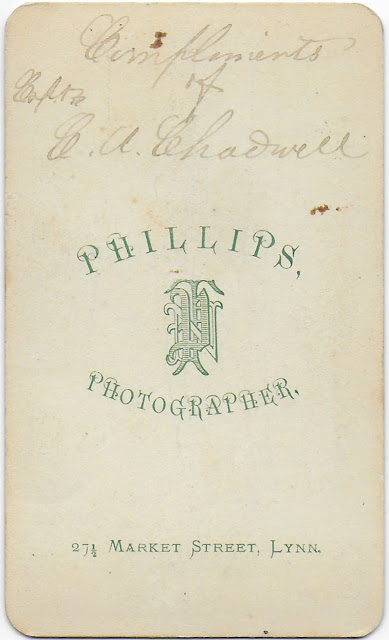 There's what looks like the abbreviation "Capt." or possibly "Corpl", above the name.  However, the only C. A. Chadwell I found who seems to fit the age and area of the man in the photograph is Cyrus Alvin Chadwell (1845-1932), who served from 1862-1864 as a private in Company E of the 38th Massachusetts 38th Infantry.

I looked to see if Cyrus' father Cyrus Alvin Chadwell (1814-1893) had a military record and might have been a captain or corporal and didn't find one, and, also, he would seem to be too old to be the man pictured.

Lottie died in 1927 and Cyrus in 1936; they're buried in the Pine Grove Cemetery at Lynn, Massachusetts, with many other relatives.

If you have a theory as to the identify of C. A. Chadwell, especially if not Cyrus Alvin Chadwell, please leave a comment or contact me directly.

Posted by Pam Beveridge at 7:30 AM