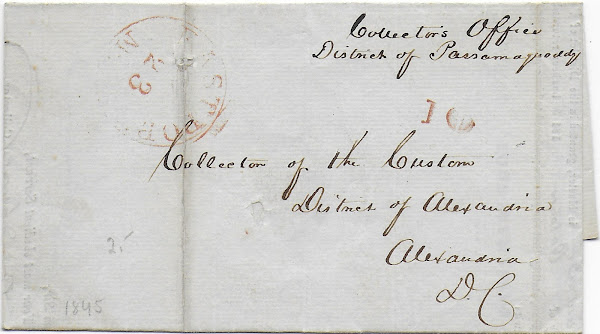 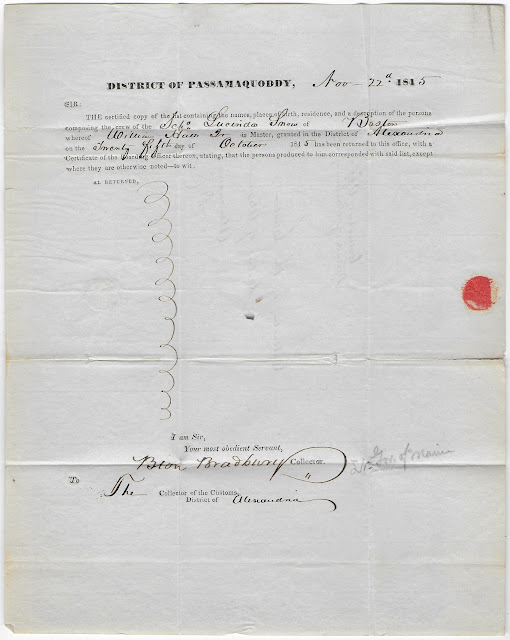 The document concerns the Schooner Lucinda Snow of Boston, whose master was then William Hall.
The schooner Lucinda Snow came to grief after a voyage to the Gulf of Mexico, where her cargo was unloaded in Galveston, and she was then chartered by the U.S. Government for use during the Mexican-American War.  During the "great norther" of May 2, 1846, the schooner was cast upon the island of Sacrificios near Vera Cruz, Mexico, and later became the subject of a lawsuit.
Bradury, a native of Biddeford, Maine and graduate of Bowdoin College, was an attorney, before, in 1844, being appointed Customs Collector for the Passamaquoddy District. He served in the Maine State Legislature and ran several times for governor, but was not successful, although, according to a contemporary note in pencil on the document, he did serve as Lieutenant Governor at one time.
See a photograph of him circa 1880, on the Maine Memory Network.  From the July 2, 1887 issue of the Portland Daily Press: 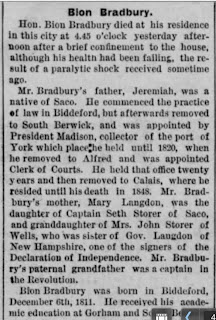 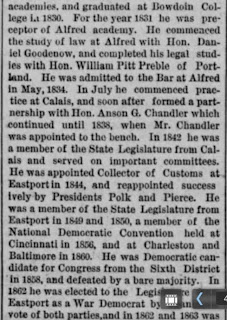 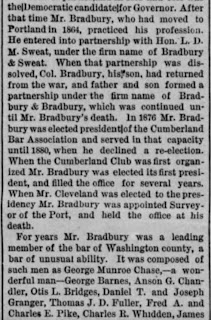 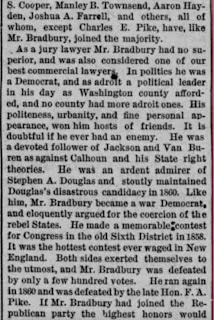 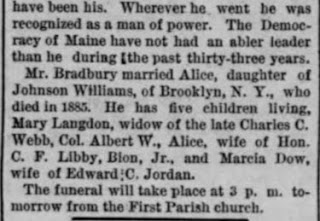 If you have information on Bion Bradbury, William Hall or the Schooner Lucinda Snow, please leave a comment for the benefit of other researchers.
And if you know of a way for Google Maps to show sea routes, please let me know.
Posted by Pam Beveridge at 11:59 AM No comments: 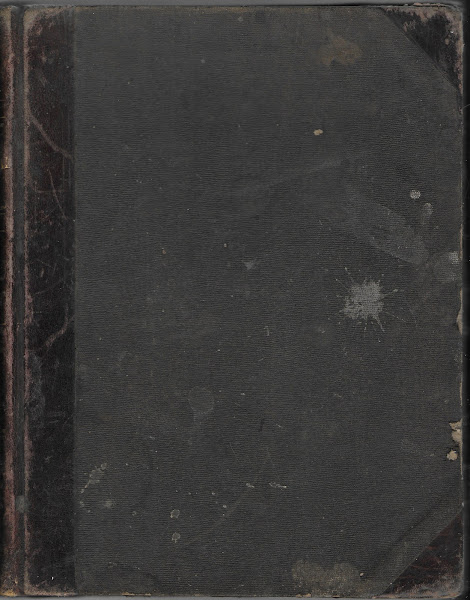 Account book of Dr. Avery Moulton Foster (1851-1929), covering the years 1882-1887, when he practiced at:
See alphabetical lists, by town, at the end of this post for the patients Dr. Foster saw or received goods and services from.
The account book tracks medical visits, medicines prescribed, amputations, tooth extractions and other medical care, as well as listing payments and the items and services Dr. Foster received as payment in kind. The municipalities of Abbot and Lewiston paid for some of the care.
Guilford and Abbot were located in an area where logging, river driving, slate mining and farming, all dangerous pursuits, were common, and where childbirth, and injuries that might seem minor to us today, were always risky.
According to Dr. Foster's FindaGrave memorial, he graduated from the medical school at Bowdoin College in 1875 and then practiced at Belmont, Maine for six years, before moving to Guilford, then Abbot and then Lewiston. After a couple years in Lewiston, he moved to Candia, New Hampshire, where he was a surgeon of note.
Dr. Foster was the son of Moses Berry Foster (1812-1886) and Eliza Ann (Benson) Foster (1816-1892).  Perhaps Dr. Foster relocated to the Lewiston area in 1886 to be closer to ailing parents.
Dr. Avery Moulton Foster married twice:
If you have information on Dr. Avery Moulton Foster (1851-1929) or Dr. Nathaniel Small Davis (abt 1836-1884), please leave a comment. 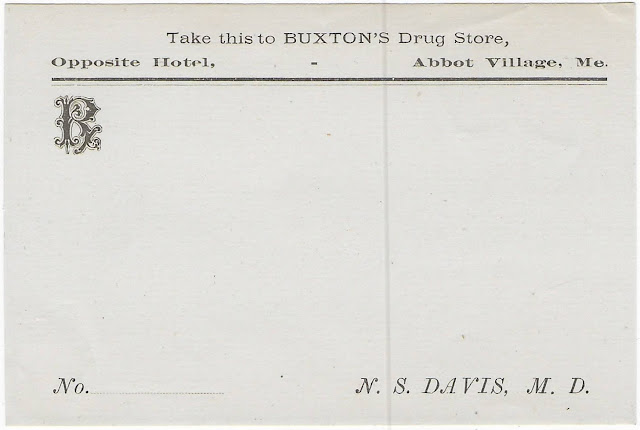 Blank prescription from Dr. Nathaniel Small Davis for a patient to take to Buxton's Drug Store in Abbot Village, Maine. 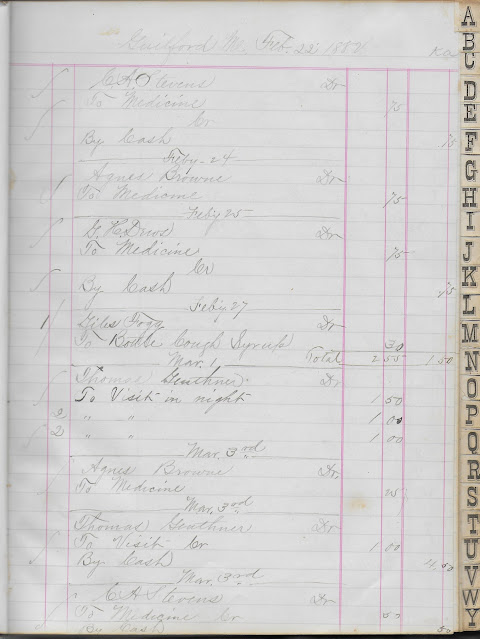 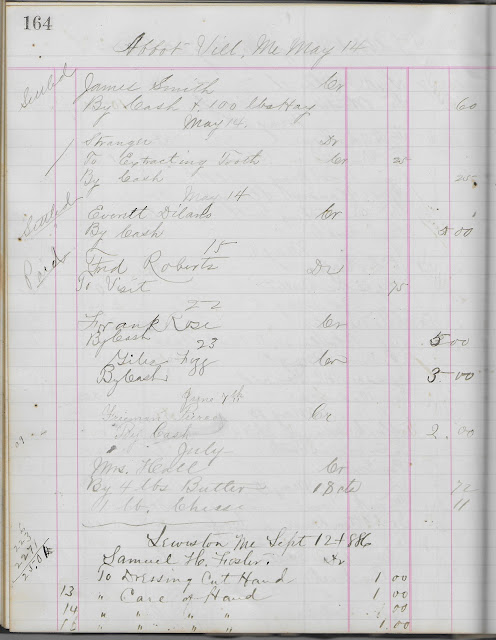 If you have ancestors or relatives who lived in Guilford, Maine; Abbot, Maine, or Lewiston, Maine, during the relevant 1880s time frame, please contact me to see if they are any of the many people mentioned in the account book.
Alphabetical Lists of Patients at Practices in Guilford, Maine; Abbot, Maine; and Lewiston, Maine, including the pages where their names appear, with multiple appearances on a page shown in parenthesis.
Note: Dr. Foster saw some patients at both Guilford and Abbot and perhaps even some of those at Lewiston.
This account book is an amazing record of the history of Guilford, Abbot and Lewiston in the 1880s.  If you have information to share on any of these people, please leave a comment for the benefit of other researchers.
Guilford, Maine
Abbot, Maine
Lewiston, Maine
Posted by Pam Beveridge at 10:12 AM No comments:

1757-1764 document where Daniel Emery, Jr., promises to pay Thomas Wallingford, Esq., the sum of four pounds and ten shillings. The note was satisfied in March 1764.
The document was found with others that pertain to nearby towns in Maine, and I suspect Thomas and Daniel had family and business on both sides of the border.

March 5, 1777, Kittery, Maine, document, with names of John Gowen, Constable, and Edw. Cutts, Town Treasurer.
Recd of Constable John Gowen the Sum of Seventy One Pound Six Shillings and Eight pence Lw money in full of the town's money he was to pay me for the year 1774.
Edw. Cutts, Town Treasurer
L 71-6-8
Kittery, March 5, 1777
If you have alternate identities for John Gowen and Edw. Cutts, please leave a comment for the benefit of other family researchers.
Note: Kittery was much larger when this 1777 document was created; what is now Eliot, Maine, was set off in 1810.
Posted by Pam Beveridge at 6:13 AM No comments: 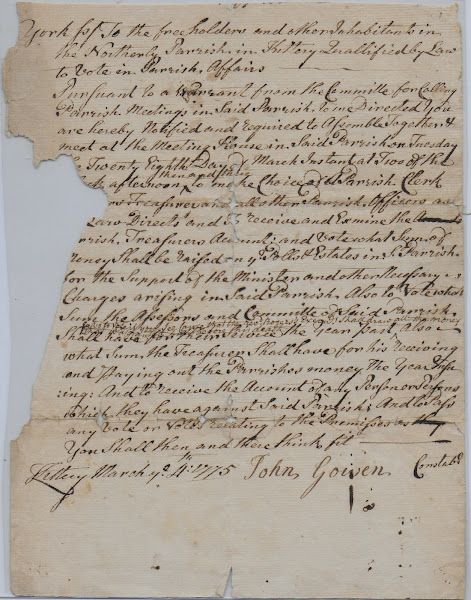 March 4, 1775, Kittery, Maine - where Constable John Gowen gives Notice to Assemble to "all Freeholders and other Inhabitants in the Northerly Parrish in Kittery Qualified by Law to Vote in Parrish Affairs".
In 1810, the North Parish of Kittery was set off to become the new town of Eliot.
Transcription at the end of this post.
Those assembled will take up: 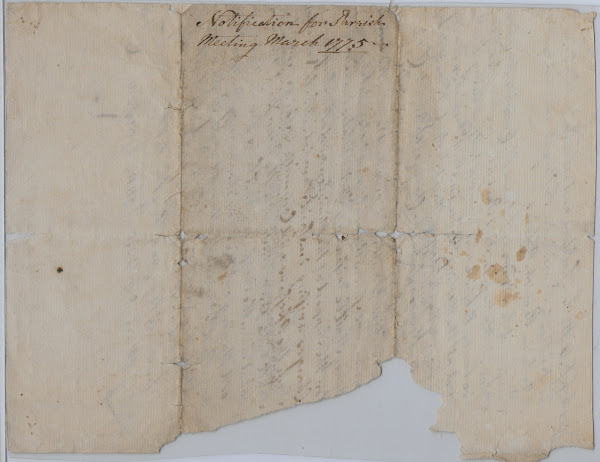 John Gowen, Constable - perhaps John Gowen (1740-1809)
Rev. Rogers - perhaps Rev. John Rogers (1692-1773)
If you have information to share on a Constable John Gowen or a Rev. Rogers, or if you have corrections/additions to the transcription below, please leave a comment for the benefit of other family researchers.
Transcription
York fs/ To the freeholders and other Inhabitants of the Northerly Parrish in Kittery Qualified by Law to vote in Parrish Affairs.
Pursuant to a Warrant from the Committee for Calling Parrish Meetings in said Parrish, to me Directed You are hereby Notified and Required to Assemble Together & meet at the Meeting House in Said Parrish on Tuesday, the Twenty Eighth Day of March, Instant at Two of the clock afternoon then and there to make Choice of a Parrish Clerk and Treasurer and all other Parrish Officers as the Law Directs and To receive and Examine [?] the Parrish Treasurers Account and Vote what Sum of Money Shall be raised on ye Polls & Estates in sd Parrish for the Support of the Minister and other Necessary as Charges arising in said Parrish. Also to Vote what Sum the Assessors and Committee of Said Parrish shall have for their Service the year past. [an inset about the money drawn by Rev. Rogers before his death] Also what Sum the Treasurer Shall have for his receiving and paying out the Parrish's money. The Year ___ And to receive the Account of any Person and Persons which they have against Said Parrish. And to also any Vote on Voters residing to the Premises as You Shall then and there think fit.
___March 4, 1775, John Gowen, Constable
Posted by Pam Beveridge at 4:44 AM No comments: 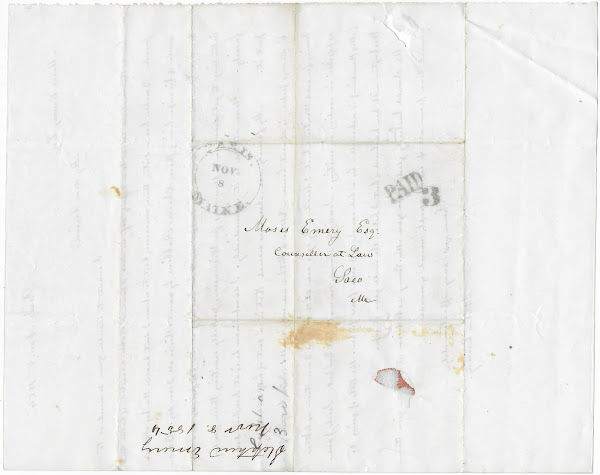 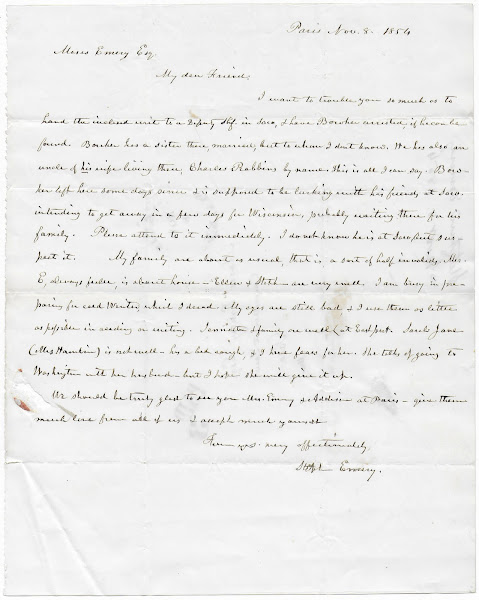 Transcription - if you have corrections and/or can fill in the blanks, please leave a comment so the transcription can be updated.
Paris, Nov. 8, 1854
Moses Emery, Esq.
My dear Friend:
I want to trouble you so much as to hand the inclosed writ to a Deputy Shf. in Saco & have Bowker arrested, if he can be found. Bowker has a sister there, married, but to whom I don't know. He has also an uncle of his wife living there, Charles Robbins by name. This is all I can say. Bowker left here some days since & is supposed to be lurking with his friends at Saco, intending to get away in a few days for Wisconsin, probably waiting there for his family. Please attend to it immediately. I do not know he is at Saco, but suspect it.
My family are about as usual, that is, a sort of half _____. Mrs. E, always feeble, is about house - Ellen & Steph are very well. I am busy in preparing for cold Winter, which I dread. My eyes are still bad & I use them as little as possible in reading or writing. Jennette & family are well (at Eastport). Sarah Jane (Mrs. Hamlin) is not well - has a bad cough & I have fears for her. She talks of going to Washington with her husband but I hope she will give it up.
We should be truly glad to see you, Mrs. Emery & Addison at Paris - give them much love from all of us & accept much yourself.
___very affectionately,
Stephen Emery
If you have information to share on the Emery family, please leave a comment for the benefit of other family researchers.
Posted by Pam Beveridge at 10:35 AM No comments: 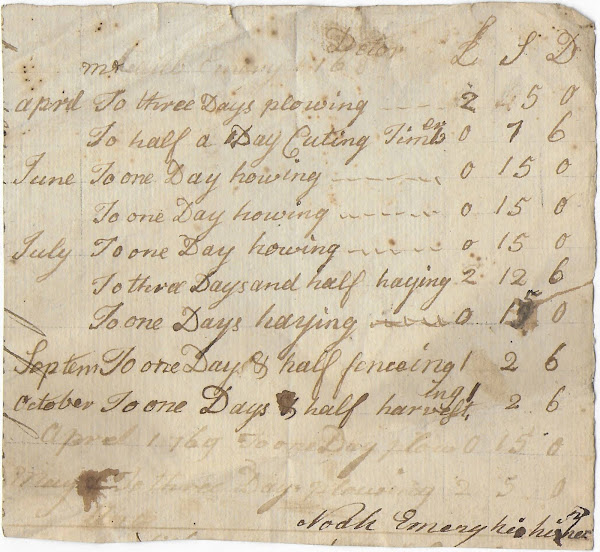 1768 and 1769 account of the days spent by a hired hand doing plowing, cutting timber, hoeing, haying, fencing and harvesting.
The worker may have been Noah Emery or the hired hand may have worked for Noah Emery.
Noah Emery may have been Captain Noah Emery (1699-1761) or his son Noah Emery (1725-1788) or another Noah Emery. They lived in the Kittery, Maine,  and/or the Rockingham County, New Hampshire, area.
It's possible that the top line indicates a Caleb Emery; if so, he may have been the hired hand.
If you have a theory as to the people connected to this document, please leave a comment for the benefit of other family researchers.
Posted by Pam Beveridge at 10:16 AM No comments: