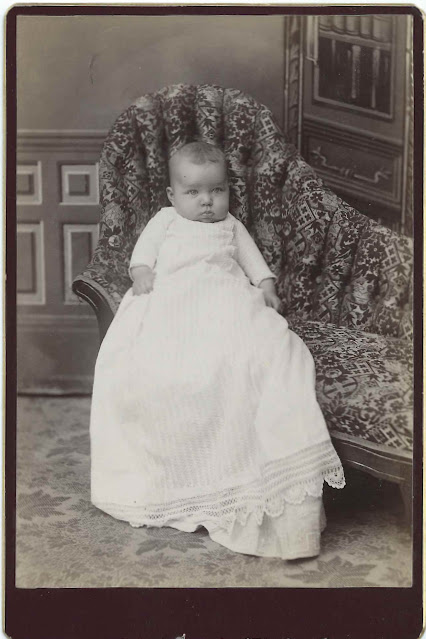 Cabinet photograph of a baby identified on the reverse as "Clara Louise Winn, four months, Born Apr. 29, 1889".  No studio imprint, but a New Hampshire Birth Record notes a child with the surname Winn born on the same date at Plainfield, New Hampshire, to Frank Emery Winn and Sarah C. (Moulton) Winn. 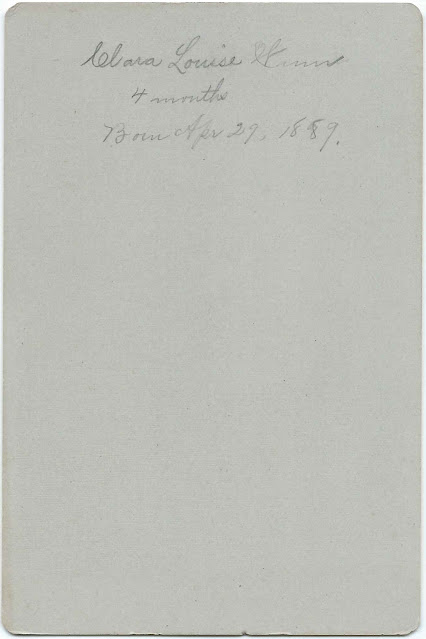 By 1900, Clara, was living with her maternal grandparents, mother and siblings at Merrimack, New Hampshire.  Her mother, Sarah C. (Moulton) Winn, indicated to the enumerator that she was married, but Fred was not listed in the household.

Clara graduated with the Class of 1907 at Bridgton Academy at North Bridgton, Maine.  Her name is included in news of alumni in the General Catalog of Bridgton Academy 1879-1916, featured in another post.  By 1910, Clara was living with her family, including her father, at Redlands, California, and teaching.

On November 27, 1913, Clara married Frank Alden Kimball, son of Frederick Clark Kimball and Bertha Abbie (Goding) Kimball, natives of York County, Maine.  Frank was born at Fort Keogh, in Montana, on July 11, 1887.  He attended Bowdoin College at Brunswick, Maine in 1910 and 1911, and worked for a time as a ranchman at Kimball, Nebraska, and Gifford, Nebraska, according to news of former students in a Bowdoin catalog of 1916.