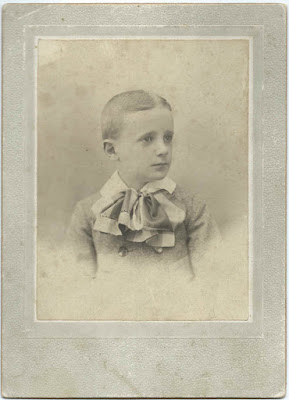 Photograph of a young boy identified on the reverse, obviously much later, as Arthur F. Doe, Sr.   There seems to be a studio imprint but it's worn away.  The identification also says A. F? Doe, which might be A. Fn Doe. 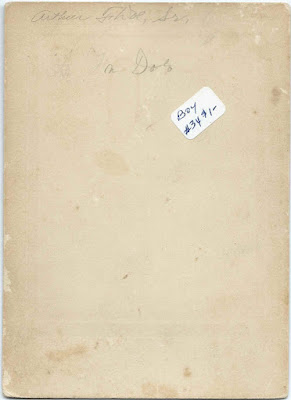 Intriguingly, there was an Arthur Franklin Doe born January 27, 1888 - either at Woonsocket, Rhode Island or Malden, Massachusetts - I found records for each - son of Arthur Lincoln Doe and Iva Ardell (Carney) Doe, both natives of Maine.

On August 26, 1915 at Newcastle, Maine, Arthur, then a farmer, married teacher Estella Medora Leighton, daughter of Edward C. Leighton and Julia E. (Billington) Leighton.   In keeping with the "Sr." designation of the photograph's identification, Arthur and Estella had a son, Arthur Franklin Doe, Jr.

Arthur Franklin Doe, Sr., spent some years at the Augusta State Hospital.  He died in 1957 and is buried in the Sheepscot Cemetery at Newcastle, Maine.