Vintage Snapshot of Victor Newberg or Newbury, Standing in Front of Auto, Possibly of Maine 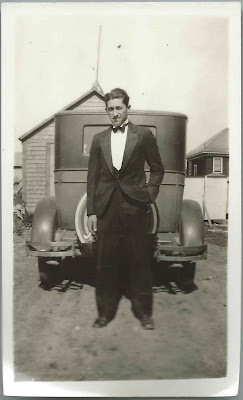 Vintage snapshot of a man standing in front of an antique, but then contemporary, automobile.  The man is identified on the reverse as Victor Newberg or Victor Newbery.

The photograph was found with a collection of photographs, many of them from Maine.  Consequently, this man may have been Victor Albert Newberg, who was born at Harpswell, Maine, and lived at Livermore Falls, Maine. 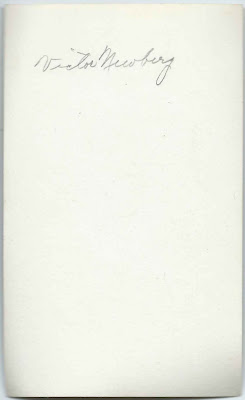 Victor Albert Newberg was born at Harpswell, Maine, in 1909, son of Martin E. Newberg and Maude Emily (Wing) Newberg.   His family was living at Livermore Falls, Maine, by 1930.  In 1934, Victor married Louise Farrington Gage, daughter of Roy Russell Gage and June A. (Roys) Gage.  Louise was born in 1911 in Vermont.

Victor, who worked at a paper mill, and Louise had at least one child, I believe.  Victor died at Harpswell, Maine, in 1993; Louise outlived him.

If you recognize the man in the photograph from your family heirlooms and research, or if you have corrections to the information about Victor Albert Newberg - being careful about posting information about living people - please leave a comment or contact me directly.

Posted by Pam Beveridge at 5:31 AM