Deed signed on November 11, 1833 where William Dearing and wife Eunice Dearing of Waterboro, Maine, sold a parcel of land at Saco, Maine, to Cornelius Boothby of Saco. 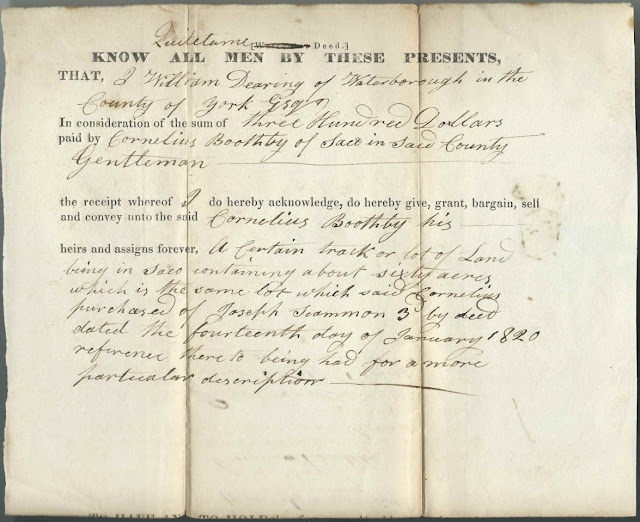 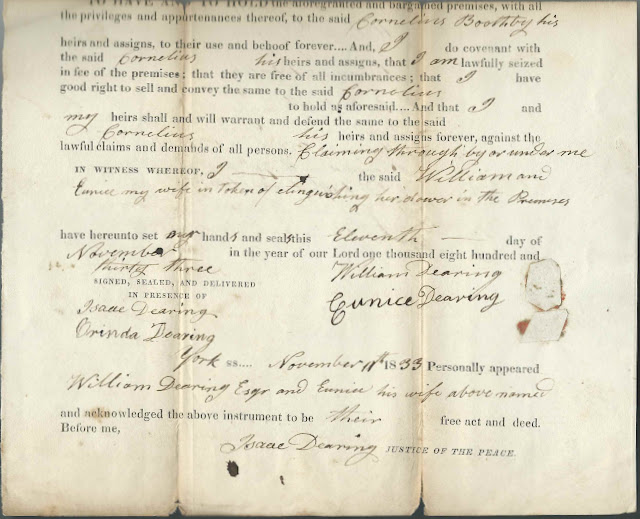 Eunice Dearing signed the deed to extinguish her dower interest in the parcel. 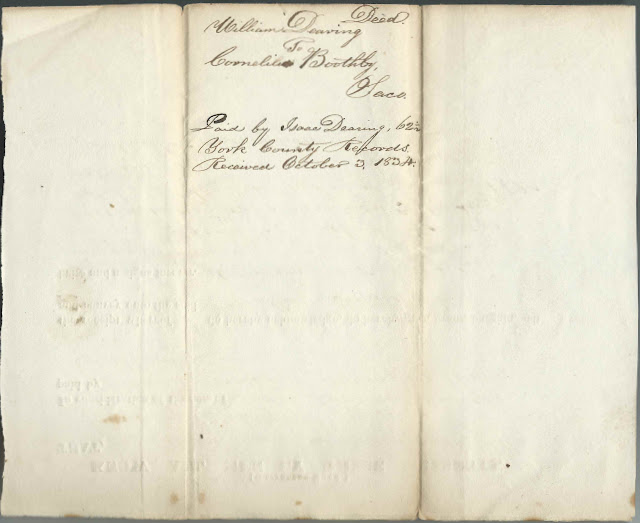 The Orinda Dearing who witnessed the deed was presumably the daughter of William Dearing and Eunice (Harper) Dearing.  Orinda was born May 20, 1808 at Biddeford, Maine.

The Isaac Dearing who witnessed the deed and was perhaps also the Justice of the Peace was a brother to William Dearing, Jr.  Isaac married Clarissa Harper in 1825.  Clarissa was a sister to Eunice (Harper) Dearing, so this was a case of two brothers marrying two sisters.

Isaac Dearing died December 16, 1872, and Clarissa not far behind, on January 3, 1873.  They're also buried in the Deering Cemetery at Waterboro, Maine.

Cornelius Boothby had more than a business relationship with the Dearing family.  He married Margaret [or Margery] Dearing, a sister to William Dearing, Jr., and Isaac Dearing.  Cornelius was born November 18, 1777, son of Samuel and Margaret Boothby.  Cornelius may have been the Capt. Cornelius Boothby, who died on February 25, 1849, and whose birth year was estimated to be 1774.

According to the Wentworth Genealogy, English and American, Volume 1, Jeremiah Goodwin was born July 1, 1786 in Eliot, Maine, son of Daniel Goodwin and Sarah (Hobbs) Goodwin.  He was a paymaster in the War of 1812 and was later a postmaster at Alfred, Maine, and the York County Register of Deeds for 20 years.  He died July 31, 1857 at Great Falls, New Hampshire.

Posted by Pam Beveridge at 8:36 AM