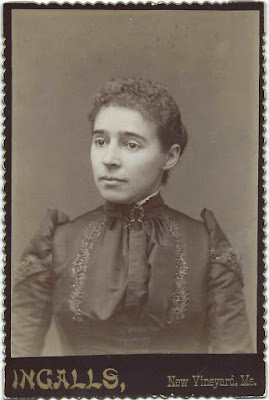 Cabinet photograph of a woman identified on the reverse as Ada E. P. Daggett; the photograph was taken by the Ingalls studio of New Vineyard, Maine, and is dated November 1891. 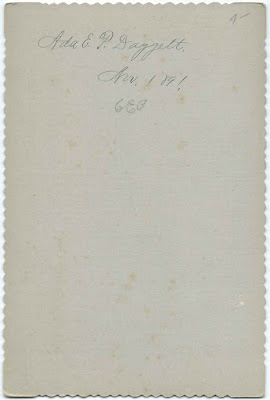 Ada Eldora Pottle was born December 23, 1853, as shown on her gravestone, presumably at Freeman, Maine, the daughter of Jeremiah Paul Pottle and Lydia (Blanchard) Pottle.   Ada may be the Ada Pottle listed as a niece in the household of Charles Pottle, a Maine native living at Minnesota City, Winona,  Minnesota.  Ada was teaching school.  Charles Lewis Pottle was the brother of Ada's father Jeremiah Paul Pottle.

In 1888, Ada married widower Albert L. Daggett of Strong, Maine, son of Plamentin Daggett and Hannah (Snow) Daggett and father of several children with his previous wife, Sarah .  A history of the Doggett-Daggett family, written by Samuel Bradlee Doggett and published in 1894, mentions that the marriage took place on June 13, 1888 at Strong, Maine.

I don't believe Ada and Albert had any children together.  Ada died in 1913 and Albert in 1916.  They're buried in the Strong Village Cemetery at Strong, Maine.   Look at the link for the image of Ada's gravestone, in the first paragraph, to see her name and birth and death dates - or click on the image of the stone on the link in this paragraph, as her name doesn't appear on the memorial page.

Scroll down to item 157 on the images of Strong, Maine, hosted by Maine Memory Net to see a c1880 photograph of the general store that Albert Daggett operated with his brother Washington Daggett.  The store operates today as Beals Store.

Posted by Pam Beveridge at 4:23 PM