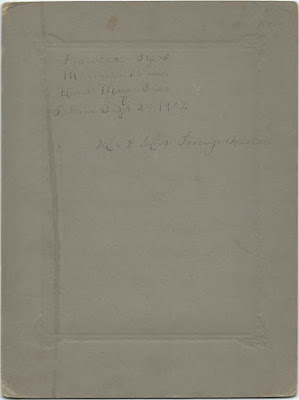 Herman Adelbert Haskell was born April 16, 1880 at Lagrange, Maine, son of Samuel Lorenzo Haskell and Lucy (Mason) Haskell.  On October 25, 1903, Herman married Phoebe Mae Smart, daughter of Llewellyn B. Smart and Emma F. (Sargisson) Smart.  Phoebe was born about August 1881 in Maine.  At the time of their marriage, Herman was a mason and Phoebe was a schoolteacher.

Herman and Phoebe had more children after this photograph was taken.  Several members of the Haskell family are buried in the Seboeis Cemetery at Seboeis, Maine.