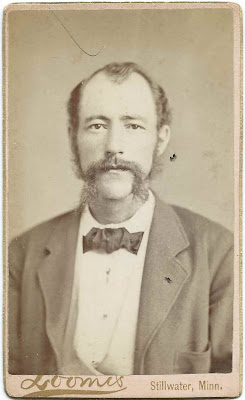 Carte de Visite of a man identified on the reverse as George Low, husband of Ossina Pollard.  The identification also mentions that George died in March 1929. 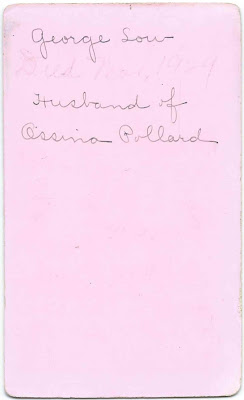 George's birth date and place appear in a short biography of George, then still living, in the History of Washington County and the St. Croix Valley, published by the North Star Publishing Company, 1881, Saint Croix River Valley (Wis. and Minn.), excerpted below: 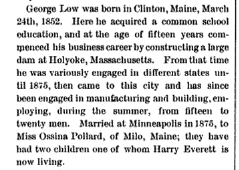 According to the excerpt above, George, at the age of 15, constructed a dam at Holyoke, Massachusetts, and then worked in different states until he arrived at Minnesota in 1875 where he had construction and manufacturing businesses.

George married Miss Ossina Pollard of Milo, Maine, at Minneapolis, Minnesota, in 1875.  She was the daughter of  Luther Cary Pollard and Sally (Stanchfield) Pollard.

According to a Rootsweb message, a Bible presented to George and Ossina on their wedding day notes that their wedding occurred on July 21, 1875 and includes their marriage certificate and Ossina's obituary.  The Bible also gives the birth dates of George, as shown above,  and Ossina, on January 25, 1852 at Milo, Maine, as well as those of three children:
Some information on George and Ossina (Pollard) Low appears in the background information for an application for a historic site designation to the Stillwater Historical Preservation Commission.  The Lows had bought property in the area involved, back in the 1870s.  Ossina, a florist, and George lived at 808 South First Street, Stillwater, Minnesota, and were considered prominent people in the area.

George was one of the architects of the Roscoe Hersey House, built in 1879 and 1880 at Stillwater, Minnesota.

By 1897, the Lows were living at Los Angeles, where Ossina is mentioned in the May 22, 1897 issue of the Los Angeles Herald as taking out a building permit for a two-story frame dwelling, Flower street, south of Thirtysixth, $3000.