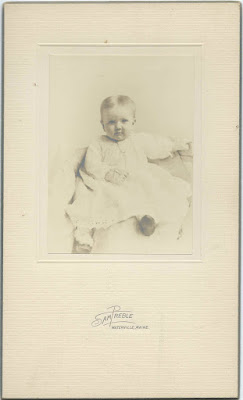 Baby photograph of a girl identified on the reverse as Madeline Brackett.  The photograph was taken by the Sam Preble Studio of Waterville, Maine. 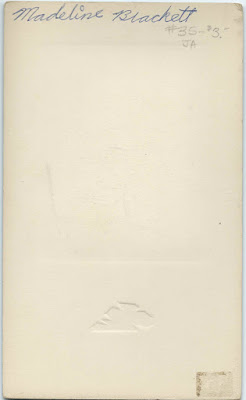 Madeline may have been the Madeline Brackett born at Sidney, Maine, on April 20, 1913, daughter of Anson B. Brackett and Lottie L. (Peavey) Brackett.   It appears that the marriage of Madeline's parents didn't last.  By 1920, Madeline was living with her mother and stepfather Winfield S. Reynolds, whom Lottie had married in 1916.

It may have been the same Madeline Brackett who married Clarence Gerry in 1930.

If you have corrections and/or additions to the information above, or if you recognize Madeline Brackett from your family photographs and research, please leave a comment or contact me directly.