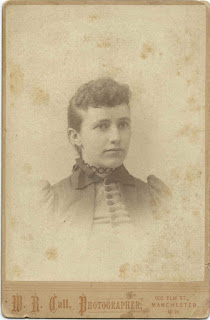 Cabinet photograph of a young woman identified on the reverse as Annie Dale.  The photograph was taken at the studio of W. R. Call of 905 Elm Street, Manchester, New Hampshire. 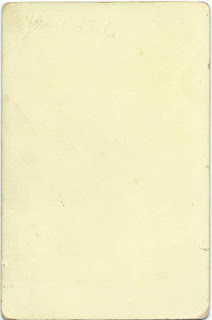 Annie may have been the Annie L. Dale whose New Hampshire marriage record shows that she was born about 1866 at Boxford, Massachusetts, the daughter of David L. Dale and Mary J. (Blanchard) Dale.  On February 7, 1893, Annie married Martin V. Mills, son of Henry Mills and Sophia Ann (Wilson) Mills.

Martin and Annie farmed at Chester, New Hampshire.  The 1900 Federal Census of Chester shows that Annie was born in the month of October, in either 1865 or 1866.  At that time, she and Martin had three children and Martin's father, Henry Mills, living with them.  By 1910, they had four children; Henry Mills had passed away by then.  Martin Mills served in the New Hampshire legislature.

If you have corrections and/or additions to the information above, or if you recognize Annie Dale from your family photographs and research as the woman described above or another person entirely, please leave a comment or contact me directly.