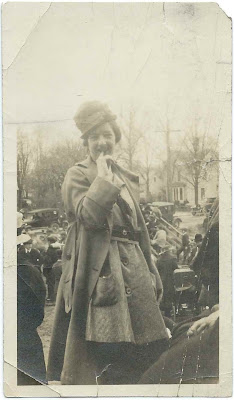 c1920s snapshot of a young woman identified on the reverse as Thelma Reed.  Thelma was attending some kind of event and is outside, with many automobiles in the background. 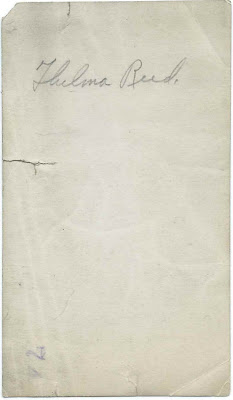 The photograph was found with a collection of photographs, most of which, but not all, depict Maine people, with several of them from the Livermore Falls, Maine, area.

Intriguingly, there was a Thelma Gertrude Read born August 11, 1903 at Mechanic Falls, Maine, daughter of Harry Ralston Read [some records shows Reed] and Lena Barilla (Taylor) Read.  By 1910 the family was living at East Livermore, or Livermore Falls, Maine.

On December 25, 1922 at Lewiston, Maine, Thelma Gertrude Read married Charles Eugene Kerr, son of John Marshall Kerr and Hattie Belle (Spooner) Kerr, who were born at Milltown, New Brunswick, and Princeton, Maine, respectively.  Charles was born January 27, 1901, also at Milltown, New Brunswick.  At the time of their marriage, Thelma was working as a stenographer and Charles as an electrician.

If you have corrections and/or additions to the information above or a different identity for the Thelma Reed shown in the photograph, please leave a comment or contact me directly.  Please be careful if commenting about people who may be living.