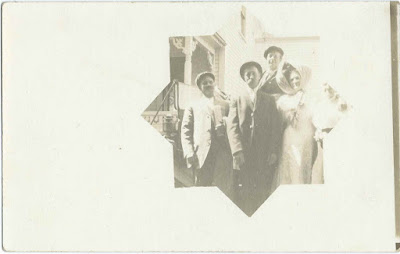 Early 1900s Real Photo Postcard of 5 people, with two of them identified: Ernest Phinney, the man with the mustache; and Blanche Elwell, presumably the woman second from right, not the woman partially obscured.

The photograph came with a collection of photographs, most of them from Maine and several from the Livermore Falls area.  Interestingly, there was an Ernest Phinney at Wilton, Maine, and  a Blanche Elwell also at Wilton, each born in the mid 1870s. 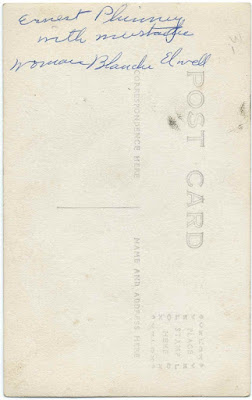 Ernest Adelbert Phinney was born September 12, 1873 in Maine, son of Alfred Lincoln Phinney and Adrianna A. (Tracy) Phinney.  In 1924, Ernest married Edna Gertrude Prince, daughter of George A. Prince and Ada L. (Sterry) Prince.  Edna had previously been married to Charles Francis Clark, with whom she had two children.  I don't believe Ernest had any children with Edna.

Blanche H. Elwell was born in 1875, daughter of Herbert G. Elwell and Mary Ella (Dakin) Elwell.  I don't know if Blanche ever married.  She worked in a woolen mill and appears to have raised her niece and nephew, at least at times.  Blanche died in 1958 and is buried with her parents in the East Wilton Cemetery at Wilton, Maine.

If you have corrections and/or additions to the information above, or if you feel that Everett Phinney and Blanche Elwell are other people, please leave a comment or contact me directly.

Posted by Pam Beveridge at 5:06 PM