1910 Photograph of George W. Lewis of Bangor, Maine; by the Weston Studio 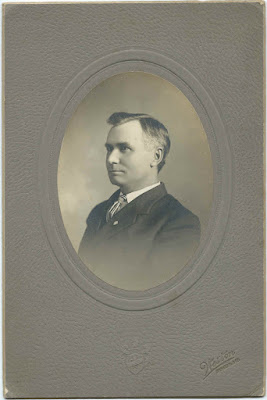 1910 photo of a man identified on the reverse as George W. Lewis of Post Office Box 502, Bangor, Maine.  The photograph was taken at the Frank C. Weston studio of Bangor. 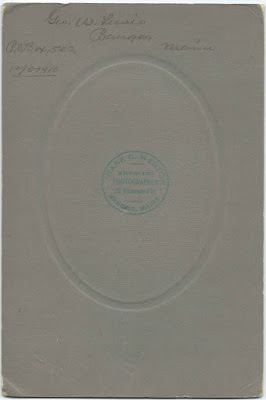 George may have been the George W. Lewis who lived at Bangor, Maine, and Brewer, Maine; was married to Ida; and had a daughter Esther.

According to Census information, that particular George was a native of Virginia.  There's a Virginia birth record of a George W. Lewis born November 21, 1869 in Northumberland County, Virginia, son of Joseph B. Lewis, Jr., and Elizabeth Lewis.  Ida, whose maiden name I don't know, and daughter Esther were both born in Maine.

The stone of George, Ida and Esther, who are buried at Oak Hill Cemetery at Brewer, Maine:
If you have corrections and/or additions to the information above, or an alternative theory for the identity of George W. Lewis, please leave a comment or contact me directly.

Posted by Pam Beveridge at 2:59 PM