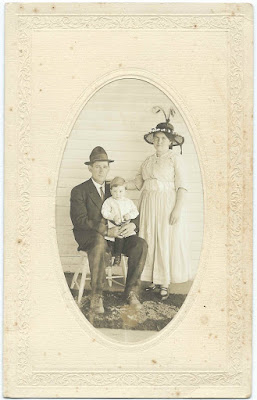 c1906 Photograph in a jacket that appears to have been placed in the wrong jacket.  The jacket reverse shows the identifications as Lloyd, 5-1/2; Hortense, 4; Estelle, 2-1/2. 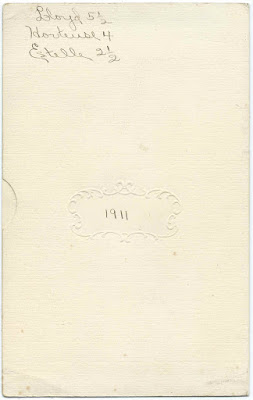 Most likely the photograph is of young Lloyd Ernest Morse and his parents Ernest Edwin Morse and Vena (Ross) Morse of Millinocket, Maine, and, later, Portland, Maine.

Ernest was born at Lewiston, Maine, on August 29, 1868, Maine, son of Edwin Eugene Morse and Frances Elizabeth (Seavey) Morse.  Ernest graduated from Colby College at Waterville, Maine, and worked as:
Vena Ross was born October 8, 1881 at Rangeley, Maine, daughter of Raymond Corridon Ross and Xarissa (Ricker) Ross.  Vena and Ernest married at Phillips, Maine, on September 14, 1904.  At the time of their marriage, Vena was a teacher and Ernest a journalist.

The children identified on the jacket:

If you're familiar with the Ernest Edwin Morse family, perhaps you have the 1911 photograph of the three children, and perhaps it's in a jacket that identifies a couple and their young child!  If so, please leave a comment - also comment if you notice errors in the information presented here.