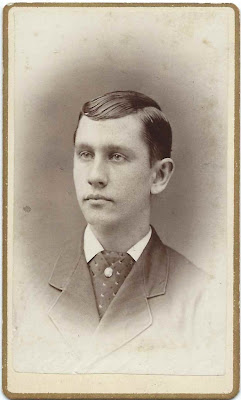 Carte de Visite of a young man identified on the reverse as Seth Downs.  The photograph was taken by the S. Towle studio (with G. C. Gilchrest) at 92 Merrimack Street, Lowell, Massachusetts. 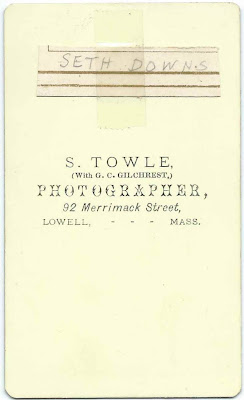 On August 17, 1892 at Oakland, Maine, Seth married Augusta F. Downs, daughter of John Downs and Amy (Stevens) Downs of Smithfield, Maine.   Augusta, who was born April 8, 1855 at Smithfield, Maine, was previously married to Otis E. Pierce, whom she married on November 30, 1876 at Waterville, Maine.  There was an Otis E. Pierce who died at Columbia Falls, Maine, on November 15, 1885, but I don't know if he was the same Otis.

At the time of their marriage, Seth was working as a machinist and Augusta as a dressmaker.