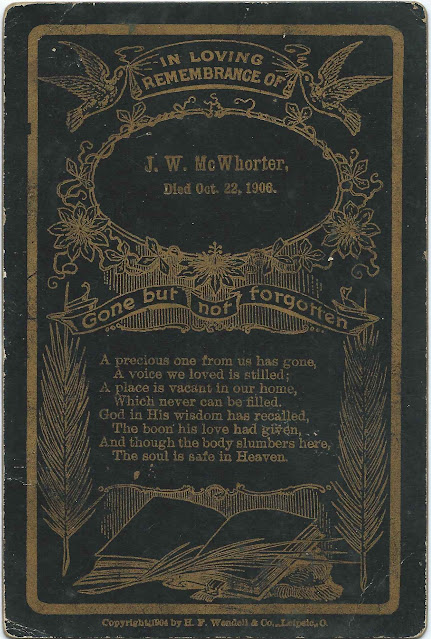 There was a John Wesley McWhorter  who died at Circleville, Ohio, presumably as the result of being struck by a train or falling off one.  One record gives his death as October 20, 1906, and another as October 21, 1906.  Perhaps the death year on the memorial card is in error.

A newspaper article indicates that McWhorter, "a wealthy stockman" was found in a ditch near the Harrison Street crossing of the Cincinnati and Muskingum Valley railway.  His diamond stickpin, diamond shirt stud and watch were found with him, facts that presumably led authorities to conclude he had died as the result of an accident.

John Wesley McWhorter was born at Albany, Ohio, on September 16, 1856, the son of James McWhorter and Mary (Farabee) McWhorter.  John married Rebecca Graham on April 13, 1875 and had at least one child, daughter Emma Ethelyn McWhorter, born in 1877.

If you have corrections and/or additions to the information above, or if you know of a J. W. McWhorter who died on October 22, 1906, please leave a comment or contact me directly.

Posted by Pam Beveridge at 7:29 AM