Cabinet Photograph of Four Children Identified as from the Ned Nute family; Photo by the Gay studio of Fall River, Massachusetts 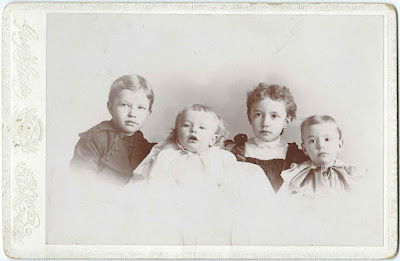 Cabinet photograph of four children with identification on the reverse: Ned Nute family.  The photograph was taken at the Gay studio at Fall River, Massachusetts.  It's possible that the surname is Nutt, rather than Nute. 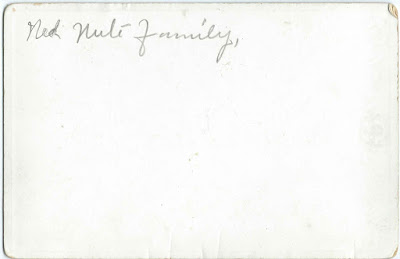 Read more about Joseph Edson Nute, Harriet Gove (Wilkins) Nute and their children in this interesting blog post.  It mentions five children, Helen, born in New Jersey, and Raymond, Alden, Warren and Katherine, all born at Fall River, Massachusetts.  Perhaps the four older children are the children in the photograph above.  The biography below doesn't mention daughter Catherine, who was born in 1899, no doubt after that book went to the printer.

Read a short biography of Joseph Edson Nute from Our Country and Its People: A Descriptive and Biographical Record of Bristol County, Massachusetts, Part 2, by Alanson Borden, and published in 1899.

Below, a brief mention of Joseph's father Orsamus Nute from History of Woodstock, Me., with family sketches and an appendix, by William Berry Lapham, published in 1882:

If you have corrections and/or additions to the information above, or an alternative theory as to the identity of the Ned Nute family, please leave a comment or contact me directly.

Posted by Pam Beveridge at 8:49 AM