Photograph of Beatrice A. Saunders; by the Harry L. Plummer studio of Lewiston, Maine 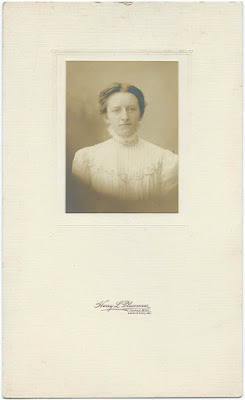 Photograph of a young woman identified on the reverse as Beatrice A. Saunders; taken by the Harry L. Plummer studio of Lewiston, Maine. 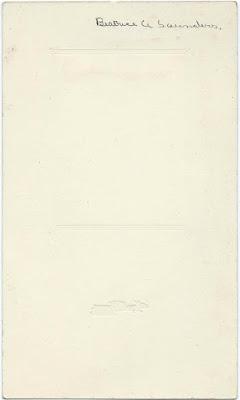 The young woman in the photograph  may have been Beatrice Anna Saunders, born at Waterford, Maine, on September 5, 1891, daughter of Frederick Prescott Saunders and Harriet Abbie (Woodbury) Saunders.

In the Censuses of 1920 of Bridgton, Maine, Beatrice is listed as living with her father and his second wife Isabel, who was Isabel was Isabel Agnew (Woodbury) Saunders, a sister to Harriet Abbie (Woodbury) Saunders, who had died in 1904.  Beatrice was working as a nurse; perhaps she had received her training in the Lewiston area, accounting for having her photograph taken there.  She received her nursing license on April 16, 1919, assuming that she is the Beatrice A. Young of Sweden Road, Bridgton, whose nursing license lapsed in 1973.

By 1930, Beatrice was working as nurse and living in the household of her stepmother/aunt; her father had died in 1928.  By 1940, she was still living with Isabel and working as the manager of a dowel mill.

Beatrice and Oliver lived at Bridgton, Maine; I don't believe they had any children.  Oliver was a member of the American Daffodil Society.  Oliver died in 1964, and Beatrice in 1989.

If you have corrections and/or additions to the information above, or if you believe the young woman to be another person, please leave a comment or contact me directly.