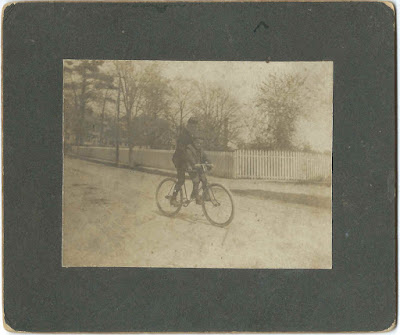 Candid photograph of two boys on a bicycle, identified on the reverse as Walter and Harold Slocomb.  I believe they were Walter James Slocomb and Harold Isaac Slocomb of Malden, Massachusetts. 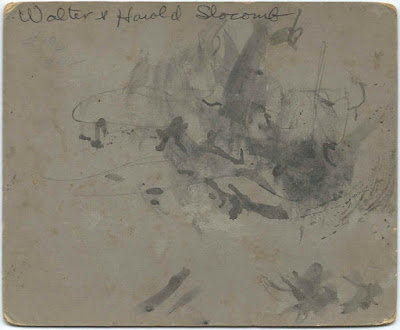 The photograph measures approximately 4" by 3", and is mounted on cardboard that measures about 6" x 5".

Walter's younger brother, Harold Isaac Slocomb, was born December 18, 1895, also at Malden, Massachusetts.  The brothers were still at Malden by the time of enumeration of the 1910 Census.

Harold Isaac Slocomb served in the U.S. Army in World War I and later joined the Coast Guard.  At the time of the 1940 Census,  he was serving at Rockland, Maine on the US Coast Guard Cutter Travis.  On his World War II registration card, he indicated he was living at Norfolk, Virginia and was retired from the Coast Guard.  His gave his next of kin as his mother, Mrs. Lyona Slocomb, 2 Floral Avenue, Malden, Massachusetts.

On February 2, 1942, at Norfolk, Virginia, Harold married Susie Ellen (Butterfield) Harmon, daughter of Scott and Josie (Fickett) Butterfield.  Susie was born at Industry, Maine.  The record indicates that both had been married before, which might account for an unsourced mention in an online family tree of Harold's marriage in 1928 to Henrietta Ethel Thorne.  Harold died May 24, 1954 and is buried at Forestdale Cemetery, Malden, Massachusetts, according to an application for his military headstone.