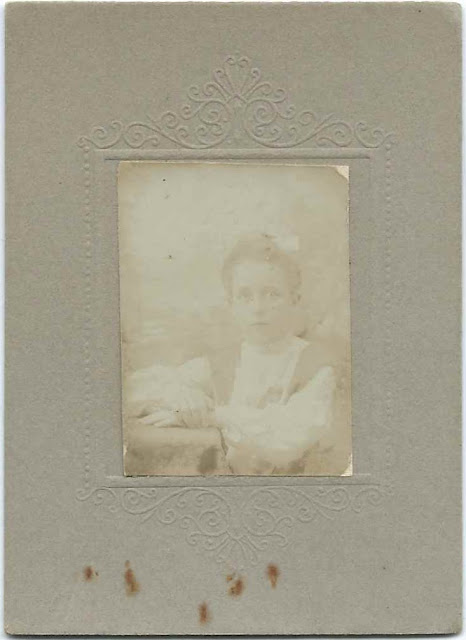 1906 photograph, presumably a school photograph, of a girl identified on the reverse as Ruby Lays of Brockton, Massachusetts. She was Ruby Agnes Lays, who would marry Rev. Norman William Lindsay. 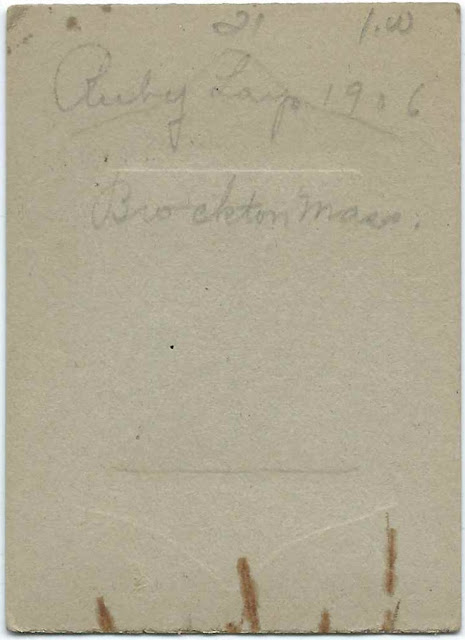 The photograph, which measures approximately 3-1/4" by 2-1/4", was found with a collection of similar sized photographs of youngsters and young adults from Brockton and area towns, such as Randolph and Braintree.

Ruby Agnes Lays was born at Brockton, Massachusetts, on June 21, 1893, the daughter of William Wharton Lays and Susan Snow (Clark) Lays, who were born in Nova Scotia and Massachusetts, respectively.

Judging from the 1920 Census taken in January, 1920, where Ruby indicated she was single and her passport application dated May 7, 1920, where she gave her name as Ruby A. Lindsay, it appears that Ruby Agnes Lay married Rev. Norman William Lindsay in the Spring of 1920.  He was born at Dundee, Scotland, on October 27, 1888.  At the time he completed his draft registration card in 1917, he was a Methodist Episcopal minister at Cape Porpoise at Kennebunkport, Maine.  By 1920, he was back in Brockton and was a divinity student.

Interestingly, I found a notice in the Christian Advocate, Volume 95, July 8, 1920, where Rev. Lindsay and Miss Ruby Lays were candidates for a mission to Mexico.  They were married by this date, I believe, but were apparently single at the time the information was sent to the publisher.  They did serve a mission to Algiers, according to their granddaughter's comment, below.

Ruby and her husband, who had at least two children, both sons, lived at Brockton and eventually moved to Middleborough, Massachusetts. According to Norman William Lindsay's Massachusetts Mason Membership card, he was a clerk and a school teacher.  Ruby died in 1977; her husband had predeceased her in 1965.
If you have corrections and/or information to share, please leave a comment for the benefit of other researchers.