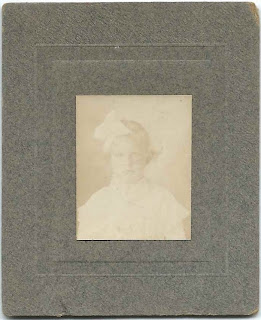 1904 photograph of a young girl identified on the reverse as Isabelle Moore of Randolph, Maine.  She was presumably Isabel Merrill Moore. 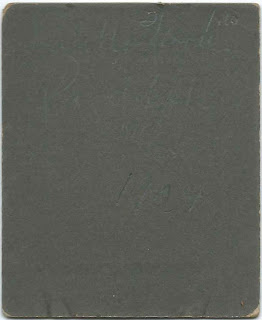 Isabel Merrill Moore was born March 24, 1900 at Randolph, Maine, the daughter of Warren E. Moore and Ritta (Merrill) Moore.  Isabel, judging from a newspaper article, may have attended Radcliffe College at Cambridge, Massachusetts.  She became a nurse and was working as a school nurse at Hampton Falls, New Hampshire, when she married farmer Ray Warren Combs on June 27, 1925 at Hampton Falls.

Ray was born July 20, 1894 at Hampton Falls, New Hampshire, the son of Charles Frank Combs and Mary Susan (Pevear) Combs.  Ray graduated from Hampton Academy in 1910 and the New Hampshire College of Agriculture and the Mechanic Arts in 1914.

Isabel and Ray lived at Seabrook, New Hampshire, where they raised several children.  Isabel died in 1957, and Ray in 1979.

If you have corrections and/or additions to the information above, or if you feel that "Isabelle" is a different person, please leave a comment or contact me directly.