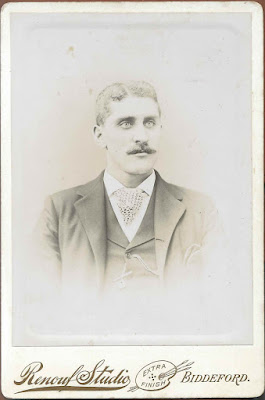 Circa 1885 cabinet photograph of a young man identified on the reverse as Frank Rodrigue.  The photograph was taken by the Renouf Studio of Biddeford, Maine. 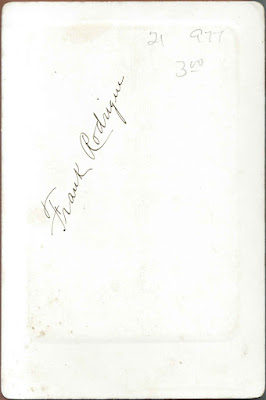 Presumably Frank Rodrigue is the Frank Rodrigue born June 8, 1866 at St. Francois de Beauceville, Quebec, who became a naturalized U.S. citizen on August 30, 1890, while he was living at Biddeford, Maine.

This Frank had first arrived in the United States at Skowhegan, Maine, on April 10, 1883, presumably following the "Canada Road" [more information at the Old Canada Road Historical Society].  Witnesses on his naturalization form were Charles Rodrigue; Joseph Rodrigue; and H. I. Lord.

Were Charles Rodrigue and Joseph Rodrigue brothers or cousins to Frank?

If you have further information on the Frank Rodrigue described, or if you believe Frank was another person, please leave a comment or contact me directly.

Posted by Pam Beveridge at 8:22 AM