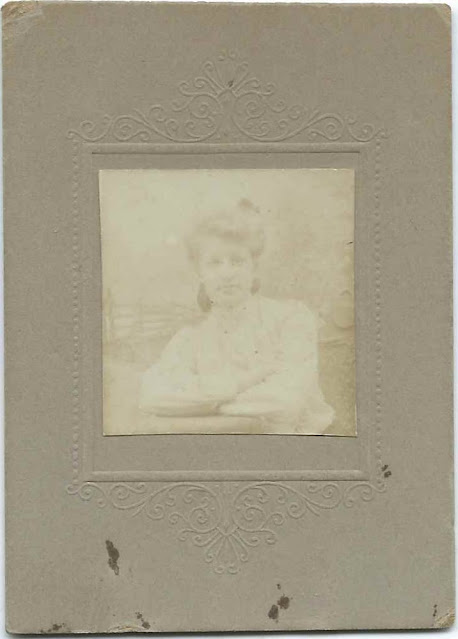 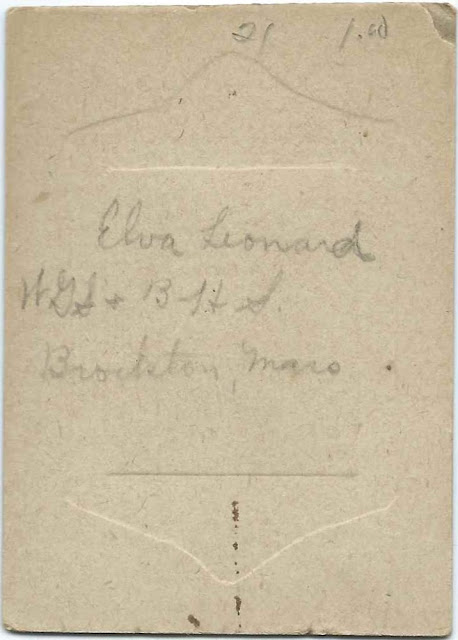 Perhaps a school photograph, the matted piece is approximately 3-1/4" by 2-1/4" and was found with similar sized photographs of youngsters and young adults from Brockton and towns near it, such as Randolph and Braintree.

Note that the identification on the reverse mentions W.G.S., presumably a grammar school at Brockton, and Brockton High School.

Elva Leonard was born October 11, 1889 at Brockton, Massachusetts, although I haven't yet found a record of her birth.  She was the daughter of Benjamin Clifford Leonard and Lucy Frances (Manley) Leonard.  Elva married John Samuel Kemp, son of Thomas and Elizabeth (Kibler) Kemp of Virginia; again, I haven't found a record of this, though Elva is mentioned as John's wife on his 1918 draft registration card.  John was a clerk at the U. S. Treasury at Washington, D.C.

The couple lived in Virginia, for many years at Arlington, and had, I believe, at least four children.  Elva died in 1953, and John in 1961.  They're buried at the Columbia Gardens Cemetery at Arlington, Virginia.
If you have corrections and/or information to share, please leave a comment for the benefit of other researchers.