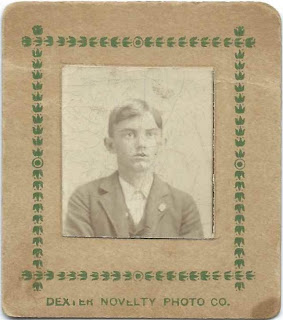 Photograph, presumably a school photograph, of a boy identified on the reverse as Harry Skilling - one of three variants of this surname I found - Skillin, Skilling and Skillings.

What do you suppose Harry's button represents?

The photograph, which measures about 1-1/4" by 1", without its mat, was taken by the Dexter Novelty Photo Company of Dexter, Maine, which may have taken the photograph at the studio or at a branch office or at schools in area towns. 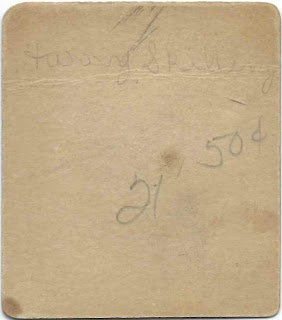 Another post features a photograph of an older man identified as John Skillin with mention of Bangor, Maine; he was presumably John W. Skillin.

Harry died in 1962 and Annie, I think, in 1970, assuming she is the Annie Skillin buried with Harry and his parents at Mount Hope Cemetery at Bangor, Maine.

If you have corrections and/or additions to the information above, or if you believe that the Harry Skilling in the photograph is a different Harry, please leave a comment or contact me directly.

Posted by Pam Beveridge at 8:03 AM