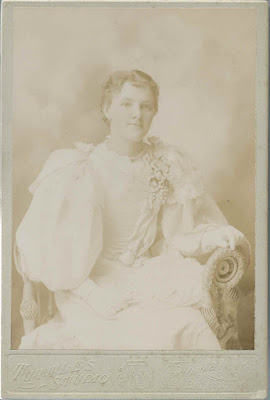 Circa 1896 photograph of a young woman identified on the reverse as Mary F. Miles, Class of 1896 at Eastern State Normal School at Castine, Maine.  The photograph was taken by the Tuttle studio of Belfast, Maine, presumably at its Castine, Maine, branch. 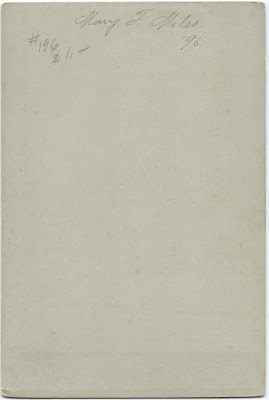 I found several possibilities for a Mary F. Miles.  Hopefully a reader will recognize her from family photographs and will leave a comment to clear up the mystery.

She may have been Mary Frances Miles born about August 1872 in Maine, the daughter of Napoleon B. Miles and Frances Elizabeth (Bradford) Miles.  She is shown in a publication of Maine Central Institute of Pittsfield, Maine, as "Mamie F. Miles".  This Mary married fellow Maine Central Institute graduate and fellow teacher Frank H. Snell, son of William and Mary Snell, on March 8, 1893.  Frank died of typhoid fever on November 7, 1894 at Corinna, Maine.

Perhaps Frank's death sparked Mary's resolve to further her teaching education by enrolling at Eastern State Normal School, where, also perhaps, the recipient of this photograph was unaware of Mary's marriage and identified her with her maiden name.  By 1900, Mary was back at home with her parents and working as a telegraph operator.  Mary later married Newport, Maine, furniture merchant Albert C. Bradbury.

Or she may have been Mary F. Miles, "Mamie", also born June 6, 1872, daughter of Dudley and Mary F. (Toothaker) Miles of Newburg, Maine.  Mary, then working as a bookkeeper, married Clarence H. Leavitt at Boston, Massachusetts, on December 19, 1911.

And the Mary F. Miles in the photograph might have been someone else entirely.  If you have a theory as to her identity or can corroborate one of the two choices presented above, please leave a comment or contact me directly.

Posted by Pam Beveridge at 7:47 AM