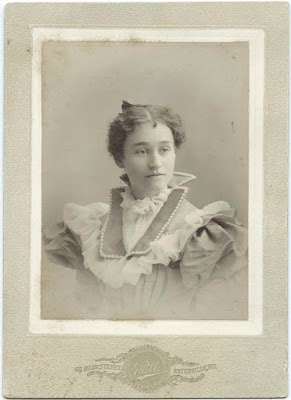 c1890 photograph of a young woman identified on the reverse in contemporary handwriting as Louise Benson of Oakland, Maine, "friend of Merrick's". 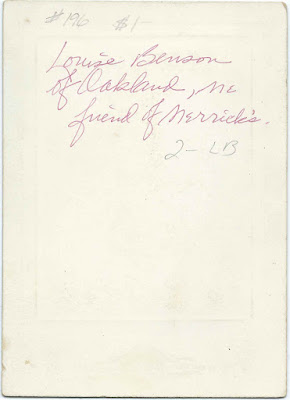 She may have been Louise May Benson, born November 20, 1872, possibly at Waterville, Maine, daughter of George Tyler Benson and Susan Elizabeth (Pollard) Benson.  An area in the west of Waterville was set off in 1873 as West Waterville and later renamed Oakland in 1883.  The Benson family may have lived in the section that ultimately became Oakland.

George Tyler Benson worked as a carriage ironer before enlisting in the Union Army during the Civil War, in which he was at least partially disabled.   He later served as Postmaster of Oakland, Maine.

Louise attended Colby College in 1896 and 1897.  She may have been the Louise M. Benson who was boarding at New York City and working as a stenographer.

By 1910 Louise  was back in Maine, living with her parents at Oakland and working as a typist, with the same situation by the time of the 1920 Census.  By 1930, she was still at home with her parents, but with no occupation listed.

By 1940, Louise's sister, Nellie Shaw (Benson) Wilbur was living with her parents and Louise in the household at Oakland, Maine.  Her husband, educator Herbert Lemuel Wilbur, was by then a patient at Foxborough State Hospital at Foxborough, Massachusetts.

Louise was living at Pittsfield, Massachusetts, at the time of her death in September 1873.  Like Louise, her parents and sister Nellie Shaw (Benson) Wilbur, were all long lived.

Posted by Pam Beveridge at 7:48 AM