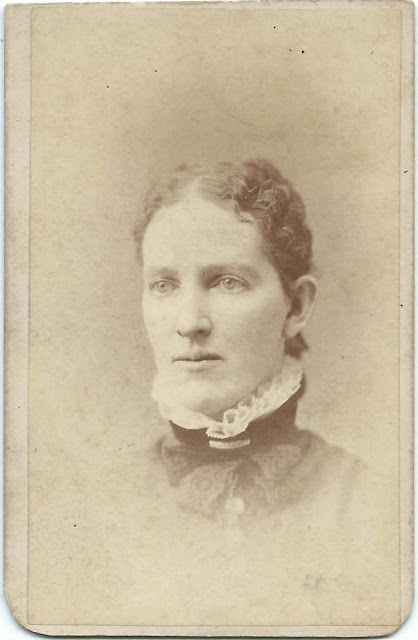 Circa 1880 photograph of a woman identified on the reverse as "Miss Caleff, Whitman School".  The photograph was taken by the Howard & Thomson studio of Brockton, Massachusetts.  She may have been Isabella Calef, a native of Lowell, Massachusetts.

The CDV is especially interesting because it contains additional information, written presumably at a later time, by one of Miss Calef's students who called her Miss Calef, rather than Caleff.  Coincidentally, this information ties in with a memorial card I featured in November of 2013, but the items were purchased separately; more information farther below. 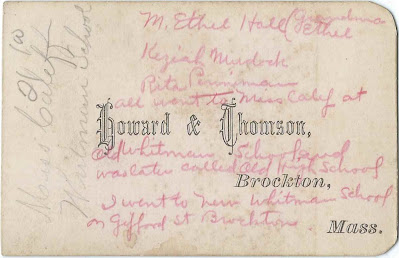 "Grandma Ethel" was Mary Ethel Hall, daughter of Augustus Florentine Hall and Susan Elizabeth (Osborne) Hall and wife of Walter Aldrich Penniman.  Ethel and Walter had a daughter, Rita Mildred Penniman, who may be the Rita Penniman named above.

A post from November 2013 features memorial cards of Ethel and her father-in-law William Reed Penniman.  After Ethel's death from cancer in 1897, Walter married the above-named Keziah Murdock, who was by then the widow of Everett F. Mank.

As for Miss Calef, I believe she was Isabella Calef, born March 7, 1847 at Lowell, Massachusetts, daughter of James Calef and Mary Ann (Shattuck) Calef.  In 1880, a Belle Calef was living at Easton, Massachusetts, and working as a teacher.

By 1900, Isabella was living in the household of her sister Helen and Helen's husband Charles H. Tilton at Somerville, Massachusetts; no occupation was listed then or in 1910.  Sadly, by 1920, she was a patient at the Gordon Home Hospital at Dorchester, Massachusetts, and by 1930 she was at the Boston Home for Incurables.  She died in 1933 at Boston, Massachusetts.

Posted by Pam Beveridge at 8:03 AM