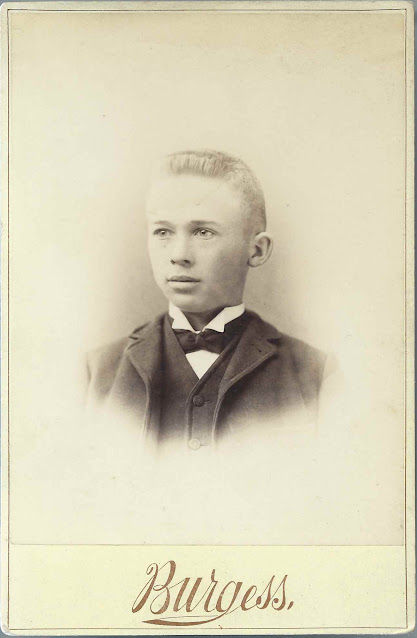 Circa 1890 cabinet photograph of a boy identified on the reverse as Ralph I. Morse of Liberty, Maine.  He was Ralph Isaiah Morse, son of Lucius C. Morse and Delia (Neal) Morse. 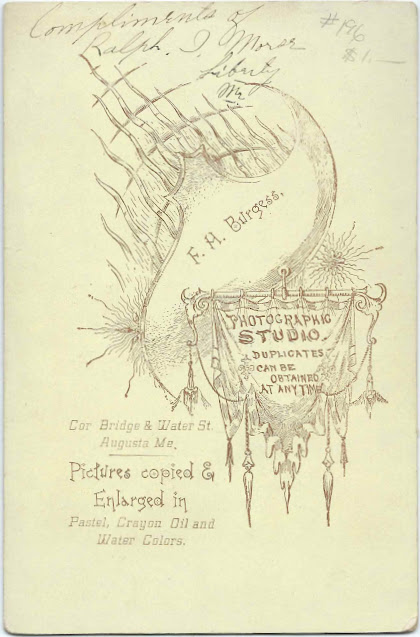 Ralph Isaiah Morse was born January 12, 1876 at Liberty, Maine, son of Lucius C. Morse and Cordelia S. (Neal) Morse.  Read more about the Morse family of Belmont, Maine here, including Lucius' stint as a mariner, his service in the Civil war and in various capacities in his adopted community of Liberty, Maine.

Ralph attended Maine Central Institute at Pittsfield,  Maine, and graduated from Bates College at Lewiston, Maine, in 1900, and from Bowdoin College at Brunswick, Maine, in 1896.  He practiced law at Belfast, Maine, and served in the Maine Legislature from 1909-1912.  During World War I, he was a Government Appeal Agent, charged with protecting the interest of registrants and their dependents.

Ralph married Florence E. Perrin, daughter, I think, of James and Mary Perrin of New York.  Florence, her mother Mary and sister Lillian were living with Ralph and Florence at the time of enumeration of the 1930 Census.  Ralph and Florence had divorced by the time of the 1940 Census.  Ralph subsequently married a Maude F., but I haven't found a record other than her name as Maude F. on his burial card, with her birth year of 1898 and death year of 1970.

Ralph died in 1957 and is buried with Maude in the Grove Cemetery at Belfast, Maine.  If you have corrections and/or additions to the information above, please leave a comment or contact me directly.