Cabinet Photograph of Edith Stanley; by the Starbird studio of Farmington, Maine 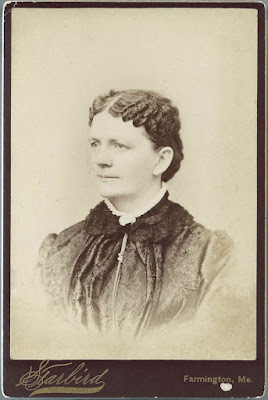 Cabinet photograph of a middle-aged woman identified on the reverse as Edith Stanley.  The photograph was taken by the Starbird studio of Farmington, Maine. 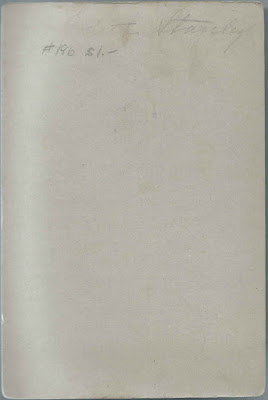 I found a few instances of an Edith Stanley in the Farmington, Maine, area, the youngest of whom was Edith Camille Stanley, born at Chesterfield, Maine, May 28, 1869, daughter of Cyrus A. Stanley and Luella B. (French) Stanley.  However, I feel that the woman in the photograph was born before 1869.

There was a student at Western State Normal School, now the University of Maine at Farmington, named Edith J. Stanley, from Pittston, Maine, according to an 1889 school publication.  She moved to Massachusetts, but perhaps moved back to Farmington or attended a college reunion.  She was born July 23, 1867, the daughter of George W. and Julia Stanley.  Again, she also seems too young to be the woman in the photograph.

And there are several possibilities also for a woman named Edith who married a Mr. Stanley, including an Edith G. Libby who married Charles H. Stanley at Lewiston, Maine, on July 23, 1886.

If you have a theory as to the identity of the Edith Stanley in the photograph, please leave a comment or contact me directly.

Posted by Pam Beveridge at 4:21 PM