Cabinet Photograph of a Woman Identified as Ettie Whitten Lewis; taken by the J. C. Higgins studio of Bath, Maine 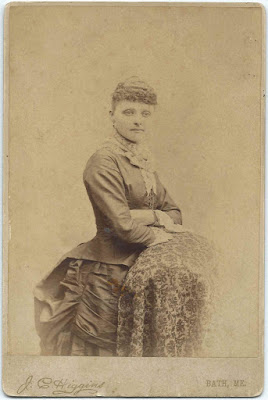 Cabinet photograph of a young woman identified on the reverse as Ettie Whitten Lewis.  The photograph was taken by the studio of J. C. Higgins of Bath, Maine. 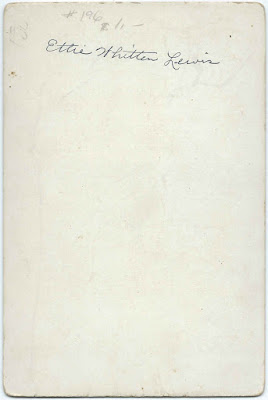 Though there was at least one other Millard F. Lewis in the area, this Millard was born September 13, 1855 at Boothbay, Maine, the son of Gilman Stockbridge Lewis and Margaret Pheba (Pinkham) Lewis, according to this entry on Find a Grave.

Interestingly, Ettie is mentioned in the book History of Wiscasset in Pownalborough, written in 1941 by Fannie S. Chase as the Mrs. Ettie Lewis who was in possession of a 5 pound cannonball fired from a British vessel in the War of 1812.  It had lodged on the Westport, Maine, property of Simon Dunton and was ordered dug out by his wife.  Simon was presumably the Simon Dunton who was a brother to Ettie's maternal grandfather Abner Dunton, which fact accounts for how the cannonball eventually was handed down to Ettie.

Millard died in 1890 and Ettie in 1946.  They're presumed to be buried at the Whitten-Lewis Cemetery at Westport, Maine, where they're mentioned on a monument with other relatives, the oldest being Abner Dunton (1786-1867).

If you have corrections and/or additions to the information above, or if you feel that the Ettie Whitten Lewis in the photograph is another woman, please leave a comment or contact me directly.