5 Early 1900s Photographs and a 1921 Memento of the Family of Frank Chester Ramsdell and Lura A. (Grant) Ramsdell of Coos County, New Hampshire 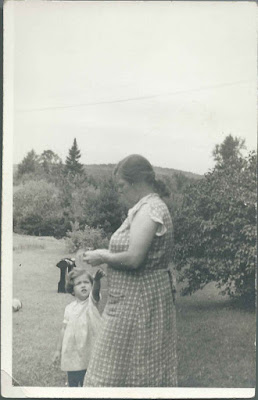 Five photographs and one birth announcement memento of the family of Frank Chester Ramsdell and Lura A. (Grant) Ramsdell of Dalton, New Hampshire, and Whitefield, New Hampshire, in Coos County. 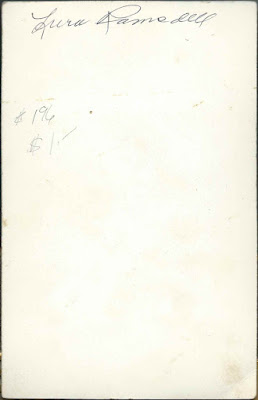 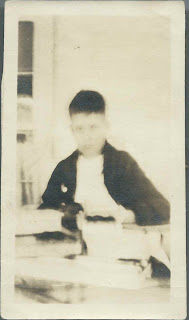 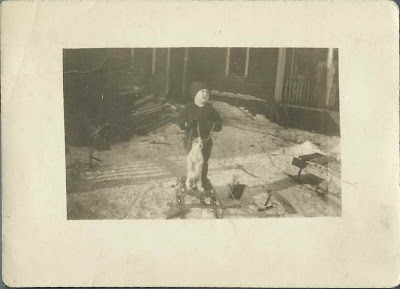 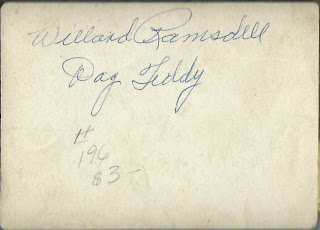 The bundled up children in the winter photograph below are identified on the reverse as Sally and Sam Ramsdell. 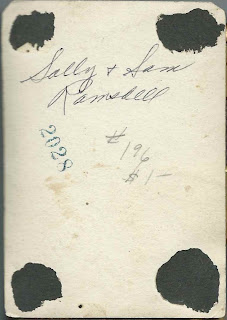 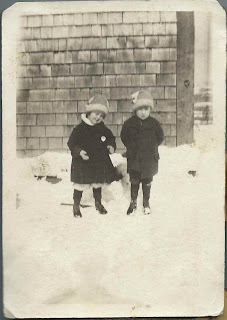 The newest photograph, perhaps a school photograph, is of a girl identified on the reverse as Alice Colby. She may have been Alice Barbara Colby, daughter of Wallace Henry Colby and Lila Marion (Ramsdell) Colby, who was a sister to Frank Chester Ramsdell. Wallace Henry Colby was related to Lura A. (Grant) Ramsdell through her mother, Mertie B. (Colby) Grant. 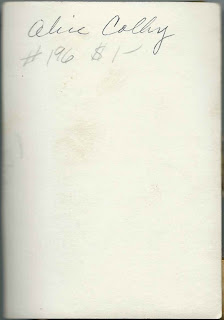 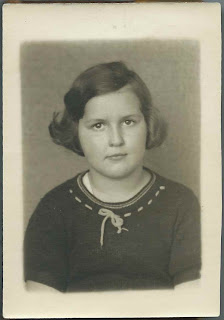 The memento is a birth announcement for Arline L. Colby, born on Thursday, January 27, 1921, daughter of Winfred Hale Colby and Edith Marion (Holmes) Colby. Winfred Hale Colby's mother was a sister to Lura A. (Grant) Ramsdell's father. And there was a Colby connection as well. I can't quite make out Arline's middle name, which looks like Leolna. Note that Arline's mother Edith had a setback after delivery but reported that she was doing better. 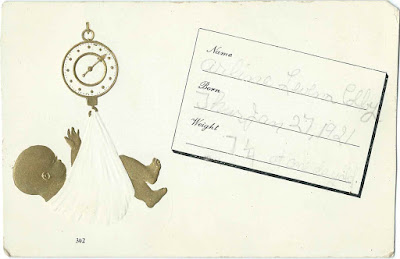 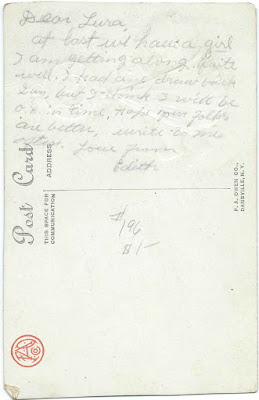 From brief online research, hopefully correct: [corrections and additions welcome - but be circumspect about providing information about people who may still be living]

Frank Chester Ramsdell was born May 17, 1885 [according to his World War I draft registration card - there are other dates in our records] at Lunenburg, Vermont, son of Chester Randall and Minnie L. (Tyler) Ramsdell. On November 29, 1919, Frank married Lura A. (Grant) Ramsdell, daughter of Nelson P. Grant and Mertie B. (Colby) Grant. Lura was born in 1892 in New Hampshire.

Frank and Lura had several children by the time of that 1919 marriage, and he indicated on his War World I draft registration card that "Lura Grant Ramdell" was his nearest relative, so they may have married earlier, divorced and remarried, though they both indicated that the 1919 marriage was their first.

Frank Chester Ramsdell died June 12, 1922. Later, on October 18, 1937, Lura married his brother, Oscar Martin Ramsdell. Lura died in 1977 and Oscar in 1980. All three are buried in Pine Street Cemetery at Whitefield, New Hampshire, along with other family members.