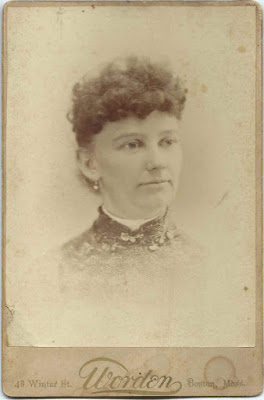 Cabinet photograph of a woman identified on the reverse as Susie M. Bancroft.  The photograph was taken by the Worden studio of 48 Winter Street, Boston, Massachusetts. 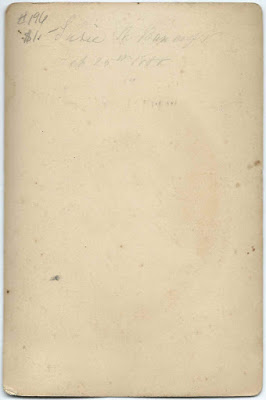 There are several possibilities for a Susie M. Bancroft.  Hopefully a reader will recognize her from family photos and research.

One tempting possibility is Susan M. (Bancroft) Richardson, wife of David L. Richardson, whom she married November 29, 1854 at Reading, Massachusetts.  That Susan M. Bancroft was born March 18, 1836, the daughter of George Bancroft and Mary (Porter) Bancroft.

Though it's unlikely that either of these Susan/Susie possibilities was known as Susie M. Bancroft at the time the photograph was taken, it's possible that she was identified by her maiden name by a family member or friend.

If you have corrections and/or additions to the information above, or a different theory on the identity of Susie M. Bancroft, please leave a comment or contact me directly.