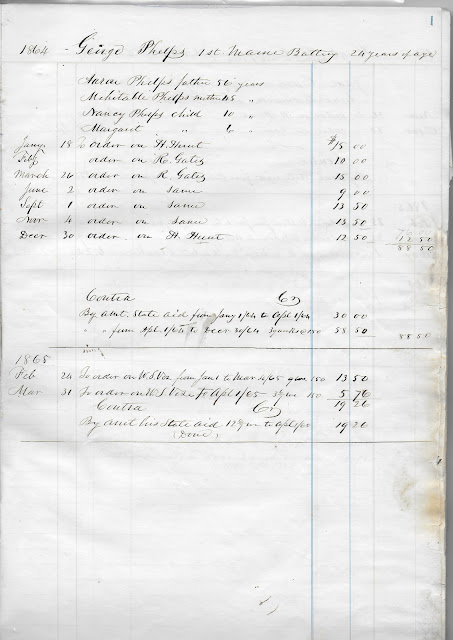 George Phelps - payments made in 1864 and 1865 to his family in Robbinston, Maine.  Phelps, age 24, was then serving in the First Maine Battery.

Found on page 1 in a ledger of Robbinston, Maine, financial transactions from the mid 1860s to the 1870s.

George had several more siblings, but they were out of the household by 1864.

There were at least two men named George Phelps in the area during the same time frame.  I've heard they've been confused in many genealogies.

Interestingly, a Find a Grave Memorial for George Nelson Phelps (1838-1923) gives a birth date as November 1838 and a death date of March 5, 1923. This George is shown as having served in the 13th Maine Infantry. He was the husband of Hannah Elizabeth (Carlisle) Phelps.


If you can shed light on the George Phelps who was the son of Aaron Phelps and Mehitable (Lambert) Phelps, please leave a comment or contact me directly.

The page shown above was found in a ledger of financial transactions of the 1860s and 1870s, including payments made to the families of nearly 50 Robbinston men serving in the Civil War.

The ledger, which measures about 13" by 8" by 1/2", is missing its hard covers. About half of the 178 numbered pages have entries. The first page of what remains is shown below.