1864/1865 Payments on Behalf of Family in Robbinston, Maine, of Civil War James Morrell; in 1860s/1870s Ledger of Financial Transactions of Robbinston 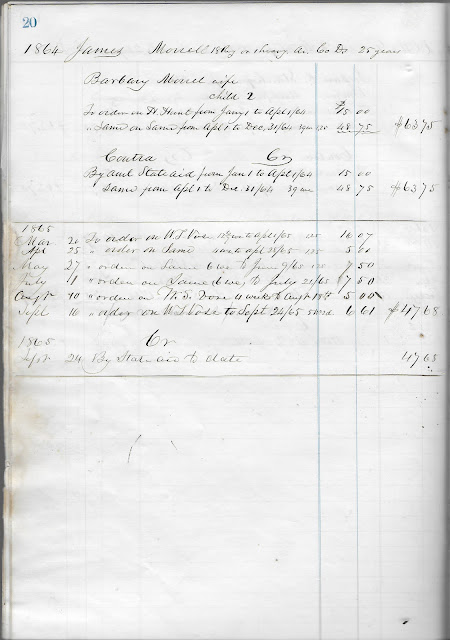 Not noted on the page: James was killed in the waning days of the Civil War, on 25 March 1865:

Found on numbered page 20 in a ledger of Robbinston, Maine, financial transactions from the mid 1860s to the 1870s.

Payments were on behalf of :

U.S., Registers of Deaths of Volunteers, 1861-1865: James Morrell died at Hatchers Run, Virginia, on 25 March 1865.  Per information on the FindaGrave memorial of James' daughter Addie N. (Morrell) Morrill Spearin (about 1863-1938): The Eastport Sentinel issue of April 5, 1865 contained the notice of James Morrell's death in the Battle of Fort Stedman in Petersburg, Virginia.

Presumably the James Morrell who died on 25 March 1865, and whose FindaGrave memorial notes that he was originally buried at Armstrong's farm and then reinterred in Poplar Grove National Cemetery in Dinwiddie County, Virginia.

If you have information on the family of James Morrell, please leave a comment or contact me directly.

Note: ignore the text stating that Robbinston, Maine, is in Saint Andrews Parish - that is across the border in Charlotte County, New Brunswick, as you can see on the map.