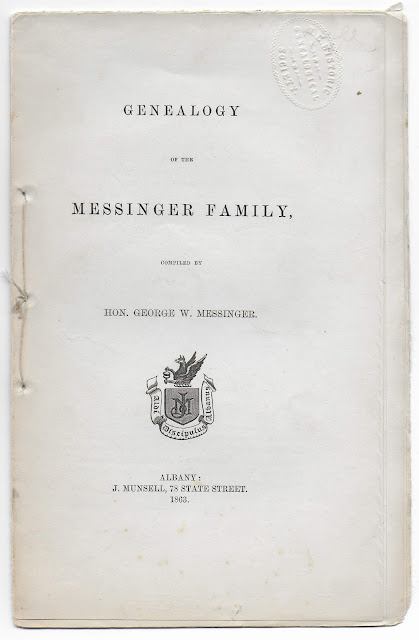 The booklet measures approximately 9-3/4" by 6-1/4" and contains 14 numbered pages; note: pages 1-3 are the cover, the inside cover and the first page of text, shown below.

The pages of this particular copy had remained uncut until the early 2000s. 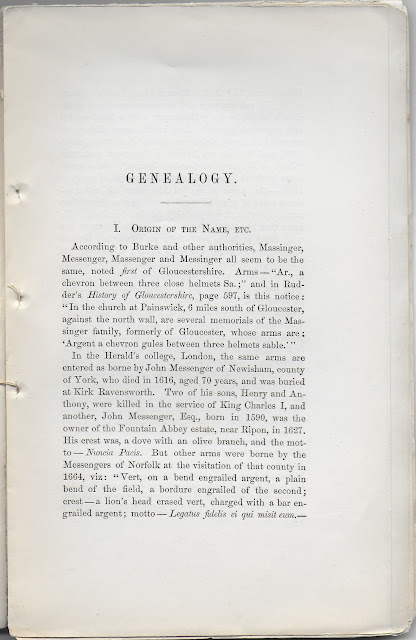 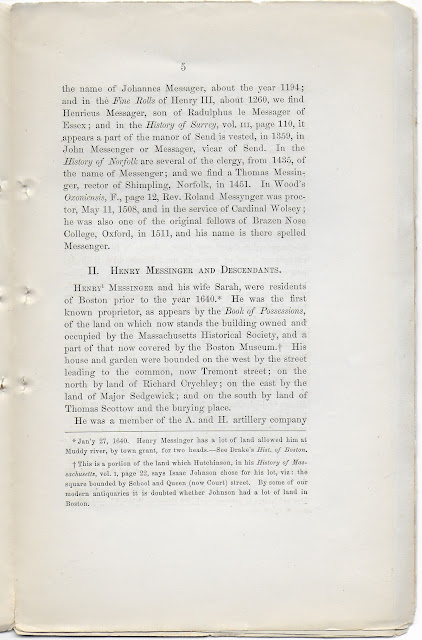 The genealogy starts on page 5 with Henry Messinger (abt 1618-abt 1681) and his wife Sarah, who were residents of Boston by 1640 or earlier.

Note: the FindaGrave memorial linked above gives Henry's death year as 1672, but this genealogy notes that he wrote a will in 1672, and likely died in 1681, as his property was appraised in April of that year.

Henry Messinger was "the first known proprietor, as appears by the Book of Possessions, of the land on which now stands the building owned and occupied by the Massachusetts Historical Society, and a part of that now covered by the Boston Museum.  His house and garden were bounded on the west by the street leading to the common, now Tremont street; on the north by land of Richard Crychley; on the east by the land of Major Sedgewick; and on the south by land of Thomas Scottow and the burying place.

If you have further information on anyone descending from Henry Messinger (1618-1672 and his wife Sarah, please leave a comment or contact me directly.

Note: I made a tree entitled Descendants of Henry Messinger (-abt 1681) of Boston, Massachusetts; from information compiled in 1863 by his 3rd great grandson on Ancestry.com using the facts from this booklet and nothing else.  The compiler did not usually include places of birth and death.  It's possible to read between the lines to guess at locations, but I didn't include them, as people travel, even when near childbirth.

Approximate location of Henry Messinger's home and lands, near Muddy River in the Fenway area