1864/1865 Payments On Behalf of Wife and Child in Robbinston, Maine, of Civil War Soldier Samuel Ross; in 1860s/1870s Ledger of Financial Transactions of Robbinston 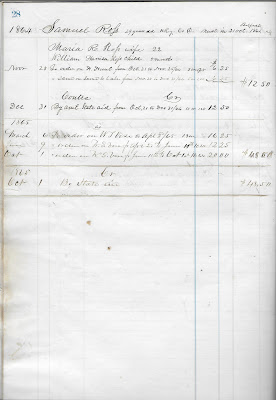 Found on numbered page 28 in a ledger of Robbinston, Maine, financial transactions from the mid 1860s to the 1870s.

After the 1865 Census of Massachusetts, it appears that Samuel and the rest of his family separated, with Samuel working in Perry, Maine, and his family living in Massachusetts.  This separation might have resulted from simple economic necessity, or perhaps it was more serious, as in the 1900 Census, Samuel described himself as divorced.