1864/1865 Payments on Behalf of Family in Robbinston, Maine, of Civil War Soldier Albert Gallatin Buck; in 1860s/1870s Ledger of Financial Transactions of Robbinston 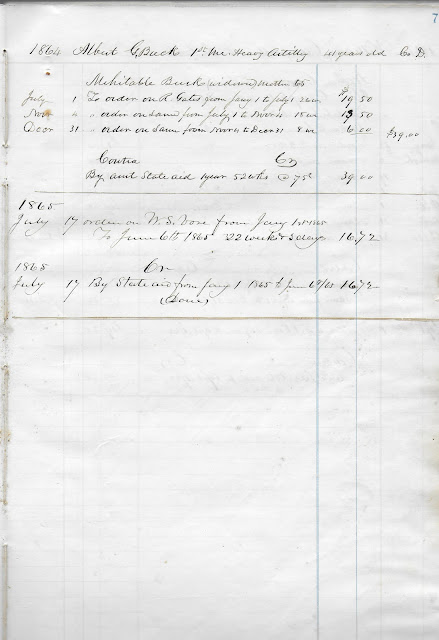 Found on numbered page 7 in a ledger of Robbinston, Maine, financial transactions from the mid 1860s to the 1870s.

After the war, he farmed at Robbinston, Maine, and served in various town offices, including as town clerk and treasurer.  A sheet in the United States Census of Union Veterans and Widows of the Civil War, 1890 notes Albert's health problems.  He died in 1901, apparently having never married.

Albert's FindaGrave memorial notes that he is buried in the Brewer Cemetery in Robbinston, Maine. This cemetery may also be known as the Picnic Hill Cemetery, as that is the name of the cemetery on a record in Maine Veterans Cemetery Records, 1676-1918.

If you have information on the family of Albert Gallatin Buck, please leave a comment or contact me directly.

Posted by Pam Beveridge at 7:17 AM