1864 Payments On Behalf of Family in Robbinston, Maine, of Civil War Soldier Benjamin S. Apt; in 1860s/1870s Ledger of Financial Transactions of Robbinston 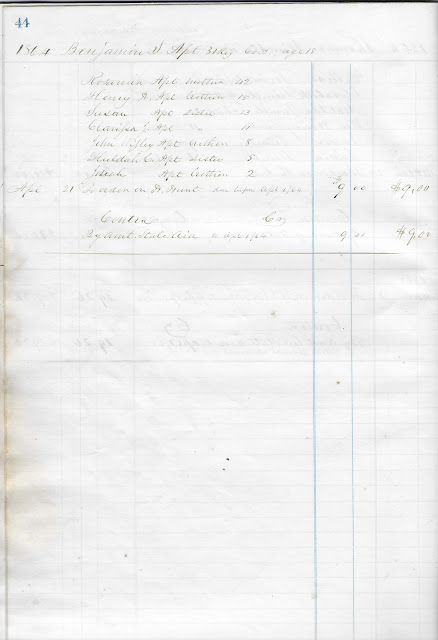 Benjamin S. Apt, age 18; then serving in Company B of the 31st Regiment; payments made in 1864 on behalf of his family in Robbinston, Maine.

Found on numbered page 44 in a ledger of Robbinston, Maine, financial transactions from the mid 1860s to the 1870s.

1872 - Reader supplied information - Benjamin Apt and Louisa Pomeroy were married at Calais, Maine.
1891  It was likely the same Benjamin Apt living in Charlotte County, New Brunswick, just over the border from Robbinston, Maine, as enumerated in the 1891 Census of St. James Parish, New Brunswick.  For this reason, he may have been omitted from the 1890 Veterans Schedules.

If you have information on the family of Benjamin S. Apt, please leave a comment or contact me directly.