1864 Payments On Behalf of Family in Robbinston, Maine, of Civil War Soldier Curtis Robinson; in 1860s/1870s Ledger of Financial Transactions of Robbinston 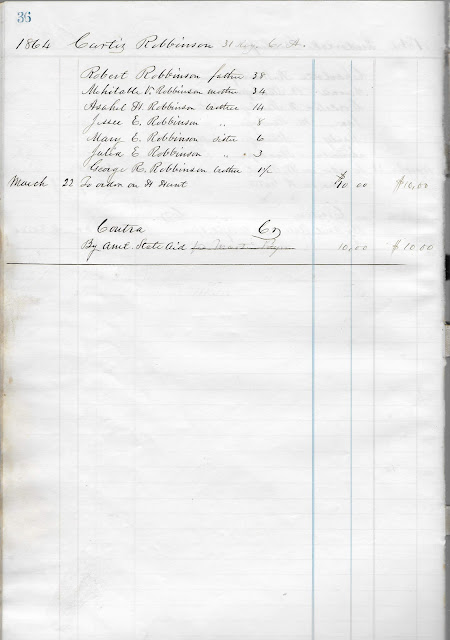 Curtis Robinson; then serving in Company A of the 31st Regiment; payments made in 1864 on behalf of his family in Robbinston, Maine.

Found on numbered page 36 in a ledger of Robbinston, Maine, financial transactions from the mid 1860s to the 1870s.

Curtis' veterans marker spells his name as Robinson, which was likely the correct spelling of the surname of the entire family.

1850 US Census of Whiting, Maine - Curtis may have been the 4 year old enumerated as Curtis Stanhope in the household of Rodolphus Stanhope and his wife Susannah

1860 US Census of Whiting, Maine - it appears Curtis, under the name Curtis Robinson, was living in the household of Rodolphus Stanhope's son Andrew Jackson Stanhope

It doesn't appear likely that Curtis "deserted" to run off to a happy life. Rather, he was probably very ill and wanted to be with his family. He died on 13 September 1865.

If you have information on the family of Curtis Robinson, please leave a comment or contact me directly.

Posted by Pam Beveridge at 8:11 AM