1864/1865 Payments on Behalf of Parents in Robbinston, Maine, of Civil War Soldier Ebenezer D. Harlow; in 1860s/1870s Ledger of Financial Transactions of Robbinston 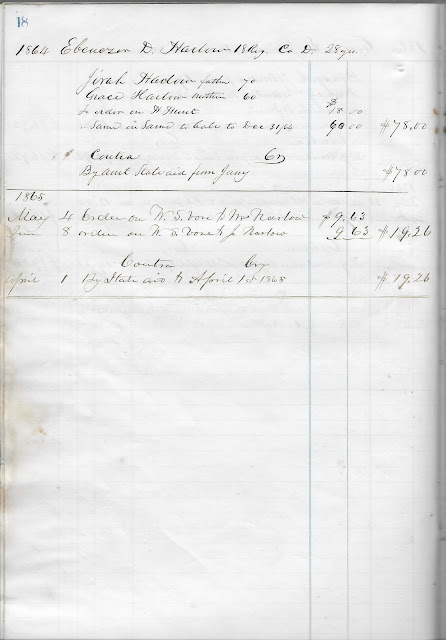 Ebenezer D. Harlow, age  28; then serving in Company D of the 18th Regiment; payments made in 1864 and 1865 to his father and stepmother in Robbinston, Maine.

Found on numbered page 18 in a ledger of Robbinston, Maine, financial transactions from the mid 1860s to the 1870s.

Page 144 of The Maine Bugle, Volume 1, 1894: Pvt. Ebenezer D. Harlow was wounded in the Battle of Totopotomy Creek, Virginia, on 30-31 May 1864. Another mention of him in a regimental history of the First Maine Heavy Artillery notes that he was discharged from the hospital on 29 June 1865.

Intention of Marriage: Mr. Ebenezer Harlow and Mrs. Barbara C. Morrill, both of Robbinston, dated at Robbinston on 20 July 1866.  She was Barbara (Rafus) Morrell Harlow (1842-1877), whose first husband was Ebenezer's friend and fellow soldier in Company D, James E. Morrell, subject of another post, who died in service. Ebenezer was earlier named guardian of Morrell's son.

The 1890 Veterans Schedules show Ebenezer D. Harlow as a resident of Robbinston, Maine; he was then suffering from some conditions but I can tease out only "rheumatism".

Ebenezer died in 1921 and is buried in the Robbinston Ridge Cemetery at Robbinston, Maine.

If you have information on the family of Ebenezer D. Harlow, please leave a comment or contact me directly.