1864/1865 Payments on Behalf of Family in Robbinston, Maine, of Civil War Soldier Allen T.Gow; in 1860s/1870s Ledger of Financial Transactions of Robbinston 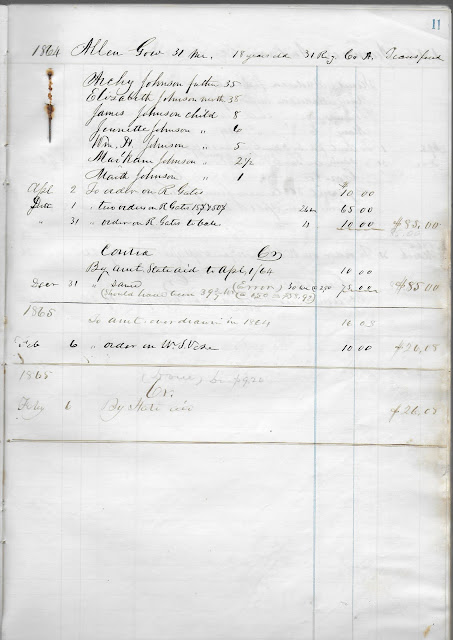 Found on numbered page 11 in a ledger of Robbinston, Maine, financial transactions from the mid 1860s to the 1870s.

Either Allen's mother was either not married at the time of his birth, or Elizabeth was a Gow whose first husband was also a Gow.  About 1856, Elizabeth married Archibald Johnson, who came to Maine from Scotland about 1853 and worked as a ship carpenter.  Perhaps Elizabeth's marriage to "Archy" is the reason she and Allen came to Maine. Archy died in Robbinston, Maine, of cholera in 1904.

Allen Gow, then a seaman, enlisted in Company A of the Maine 31st Infantry Regiment on 30 January 1864 and was transferred to the Invalid Corps on August 16, 1864.

Allen had a candy confectionery business in Portland, Maine; there, on 9 June 1869, he married Lucy Ann Brown. About 1881 Allen, Lucy, and their daughter moved to Lincoln, Nebraska, where more children would be born, and where Allen died on 17 July 1893.

He is buried in the Wyuka Cemetery at Lincoln, Nebraska, with his wife Lucy A. (Brown) Gow (1846-1922) and other family members.

If you have information on the family of Allen Gow, please leave a comment or contact me directly.