1864/1865 Payments on Behalf of Family in Robbinston, Maine, of Civil War Soldier William Johnson; in 1860s/1870s Ledger of Financial Transactions of Robbinston 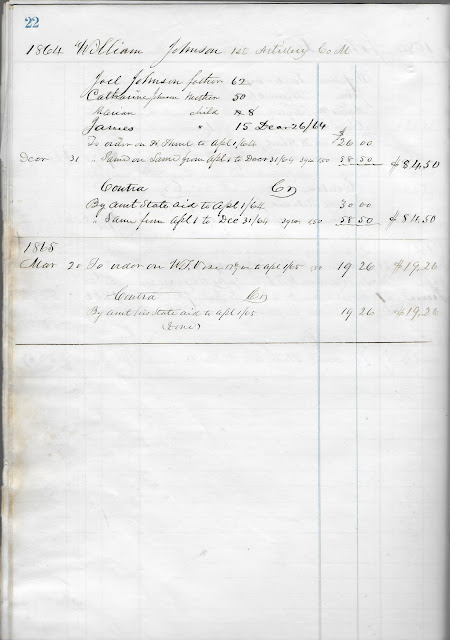 William Johnson; then serving in Company M of the 1st Artillery; payments made in 1864 and 1865 to his parents and siblings in Robbinston, Maine.

Found on numbered page 22 in a ledger of Robbinston, Maine, financial transactions from the mid 1860s to the 1870s.


There were several men by the name of William Johnson in the eastern Washington County area - a  William P. Johnson and a William H. Johnson, both born in the relevant era, and perhaps more.  If you can identify the William Johnson who was the son of Joel Johnson and Catharine (Gillis) Johnson, please leave a comment or contact me directly.

Another record in Maine State Archives, 1718-1957, Military Records of the Civil War, shows that William P. Johnson was:
I believe this was the William Johnson who married Margaret Russell, a native of St. Andrews, New Brunswick, just over the mouth of the St. Croix River from Robbinston, Maine. By the time of the 1920 US Census, William P. Johnson was a widower and was living in Sangerville, Maine, in the household of his son Joel, who was working in a woolen mill there.  William died in Sangerville in 1924 and is buried in the Village Cemetery at Sangerville, Maine.

Find a Grave: William H. Johnson (about 1844-1910), buried in the Dennysville Cemetery at Dennysville, Maine

If you can identify the William Johnson who was the son of Joel Johnson and Catharine (Gillis) Johnson, please leave a comment or contact me directly.