1864/1865 Payments on Behalf of Family in Robbinston, Maine, of Civil War Soldier Samuel Seeley 2d; in 1860s/1870s Ledger of Financial Transactions of Robbinston 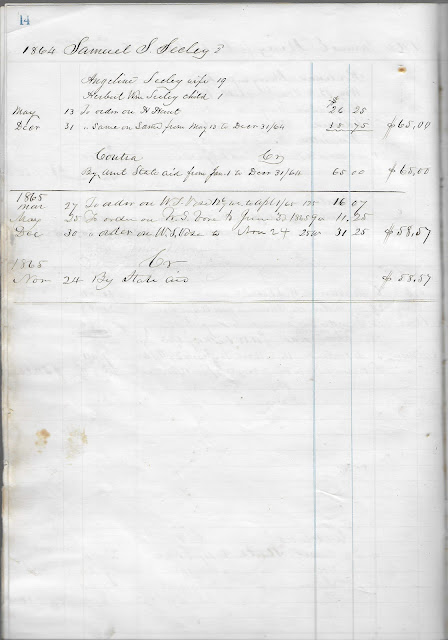 Found on numbered page 14 in a ledger of Robbinston, Maine, financial transactions from the mid 1860s to the 1870s.


There was a Samuel Stone Seeley, born in Perry, Maine, on 20 March 1844, who seems to fit, but whose parents were Ephraim Seeley and Almira (Davis) Seeley. Perhaps Samuel was named after another family member.

An intention of marriage in the record collection Maine Marriages 1771-1907, was filed on 27 November 1862 between Samuel S. Seeley, 2d, of Perry, Maine, and Miss Angeline Alice McCoy of Robbinston, Maine, daughter of William McCoy and Susan (Dean) McCoy. They married on 10 December 1862.

According to a record in the Maine State Archives, a Samuel S. Seeley 2d, then a farmer, age 20, in Lewiston, Maine, was drafted into Company A, 3rd Infantry Regiment on 8 August 1863 and mustered in that same day. He was discharged on 29 May 1865, after having served in several units. The unit mentioned in this record, Company A of the 3rd Regiment, is the same as that noted on the cemetery record of Samuel S. Seeley 2nd. The Lewiston reference is a bit jarring, but perhaps Samuel and Angeline or Samuel, alone, went to Lewiston to work.

After the war, Samuel and Angeline farmed at Robbinston, Maine, perhaps South Robbinston, and had two more children.  Angeline died of pneumonia in 1905 at Robbinston. In 1907, Samuel married Mary E. Aylward.

A record in Maine, Veterans Cemetery Records, 1676-1918 gives Samuel's date of death, from heart disease, as 13 August 1919 at Robbinston, Maine. He was then living in South Robbinston. This record notes his service in Company A of the 3rd Regiment of Infantry, Maine Volunteers and that he was buried in the Lincoln Cemetery.  This may be the cemetery back in the woods behind the old house where Valerie Lincoln lived, across the road from Boyden Lake.

A mention online notes that a Daggett is buried in the cemetery behind the Lincoln house. The photograph below shows students at the Maple Point School in South Robbinston, with two Daggett girls mentioned. The Seeley children may have been too old to be students by the time this photograph was taken, but they may grown up nearby. 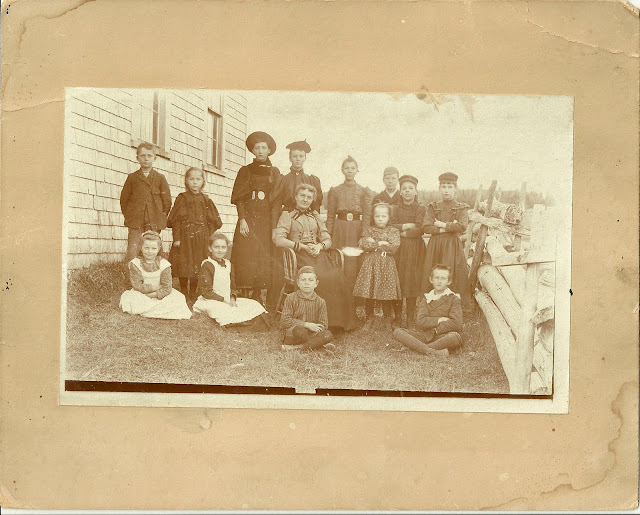 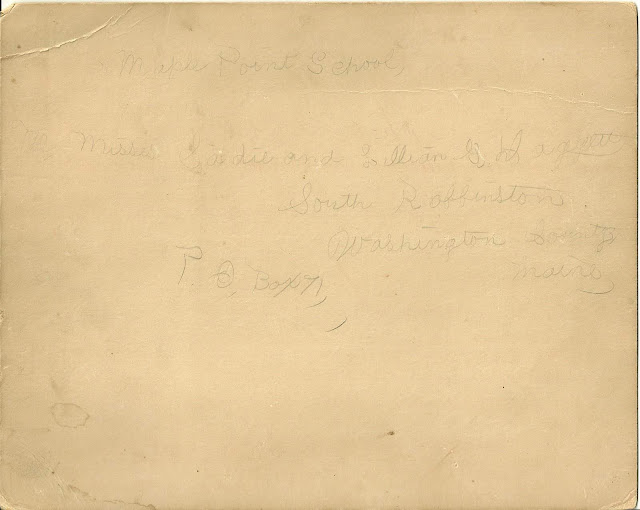 If you have information on the family of Samuel Seeley, 2d, and/or the Lincoln Cemetery, please leave a comment or contact me directly.