1864/1865 Payments on Behalf of Family in Robbinston, Maine, of Civil War Soldier George E. Johnson; in 1860s/1870s Ledger of Financial Transactions of Robbinston 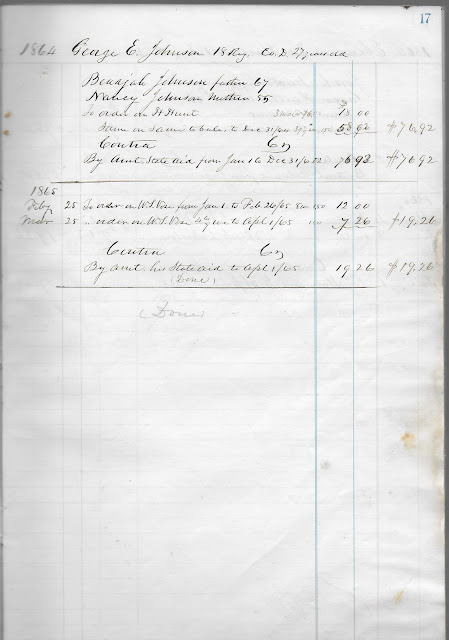 Found on numbered page 17 in a ledger of Robbinston, Maine, financial transactions from the mid 1860s to the 1870s.

Page 281 in The First Maine Heavy Artillery, 1861-1865: A History of Its Part and Place in the War for the Union, with an Outline of Causes of War and Its Results to Our Country, published by Horace H. Shaw and Charles J. House in 1903:

On 17 October 1865, George E. Johnson married Martha J. Goulding, daughter of James Goulding (1812-1884) and Martha F. (Clark) Goulding (1815-1895) of Robbinston.  George and Martha farmed at Robbinston, apparently on George's parents place, and had six children, one of whom died young.

It's fun to think that the farm might have been the same farm on Robbinston Ridge Road, or nearby, of George E. Johnson's grandson Oscar Howard Johnson (1891-1959), whom my family would frequently visit.


If you have information on the family of George E. Johnson, please leave a comment or contact me directly.

Posted by Pam Beveridge at 8:42 AM