1864/1865 Payments on Behalf of Family in Robbinston, Maine, of Civil War Soldier William Embleton; in 1860s/1870s Ledger of Financial Transactions of Robbinston 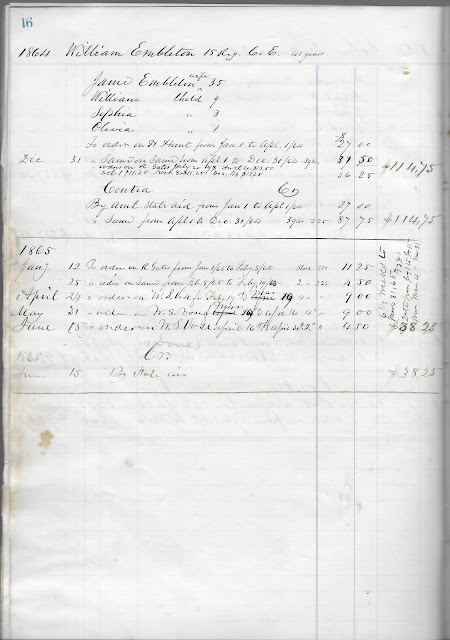 William Embleton, age 41; then serving in Company E of the 15th Regiment; payments made in 1864 and 1865 to his wife and children in Robbinston, Maine.

Found on numbered page 16 in a ledger of Robbinston, Maine, financial transactions from the mid 1860s to the 1870s.

Payments were made of behalf of:

William Embleton first enlisted in December of 1861. He apparently re-enlisted on 20 February 1865. The latter enlistment notes that he was born at Richibucto, New Brunswick, about 1824 and was a resident of Robbinston, Maine.

There were apparently several men by the name of William Embleton or William Henry Embleton in Maine and New Brunswick in the relevant era.  Hopefully a reader will share information to unravel the different identities and pinpoint the William Embleton whose family was living in Robbinston, Maine, in 1864 and 1865.


If you have information on the family of William Embleton, please leave a comment or contact me directly.

Posted by Pam Beveridge at 1:20 PM