1864/1865 Payments on Behalf of Family in Robbinston, Maine, of Civil War Soldier Samuel Boyden; in 1860s/1870s Ledger of Financial Transactions of Robbinston 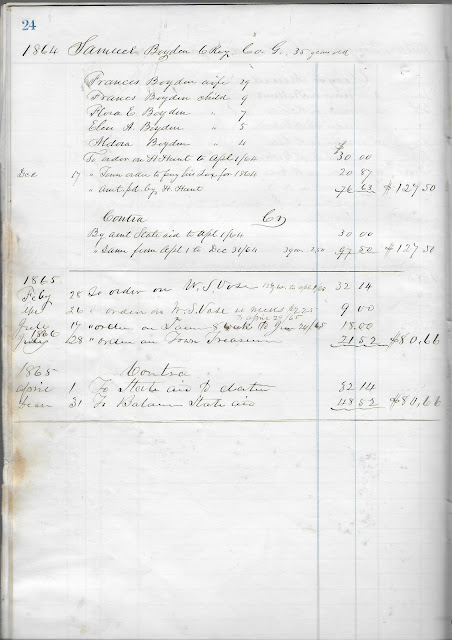 Samuel Boyden, age 35; then serving in Company G of the 6th Regiment; payments made in 1864 and 1865 on behalf of his wife and children in Robbinston, Maine.

Found on numbered page 24 in a ledger of Robbinston, Maine, financial transactions from the mid 1860s to the 1870s.

Samuel Boyden (abt 1828-1891), son of Philip Boyden and Jane (Mason) Boyden, husband of Frances Olive (Plummer) Boyden.  After the war, Samuel and Frances had several more children.  The 1890 Veterans Schedules [below] note that they were then living in South Robbinston; perhaps they always had.

If you have information on the family of Samuel Boyden, please leave a comment or contact me directly.

Posted by Pam Beveridge at 9:38 AM